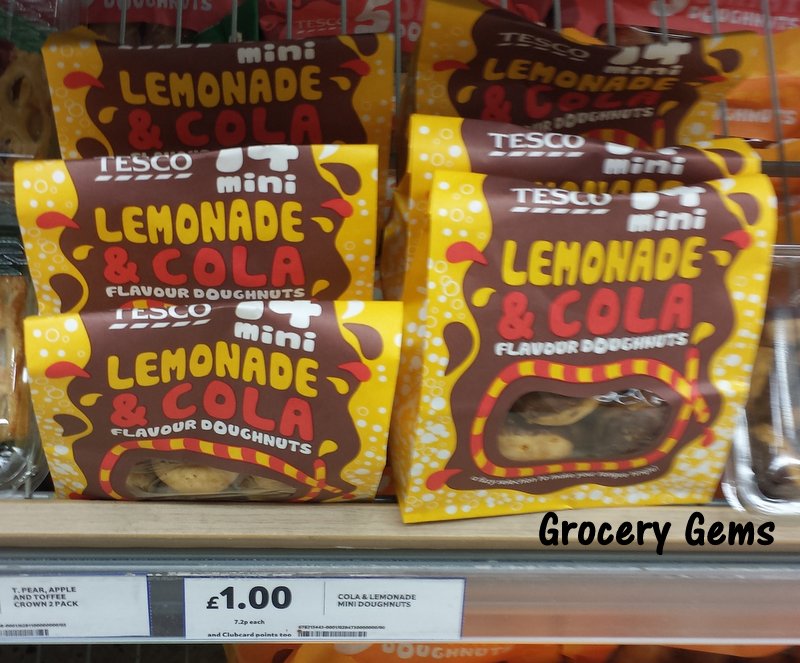 Tesco Lemonade & Cola Doughnuts: Following on from their previous wacky doughnut flavours (was anyone tempted by the Turkey & Stuffing Weirdoughs?), are these Lemonade & Cola flavoured doughnuts. although strangely the "Weirdoughs" label appears to have been dropped. Described on the packaging as a fizzy selection to make your mouth tingle. £1.00p for 10 mini doughnuts at Tesco. 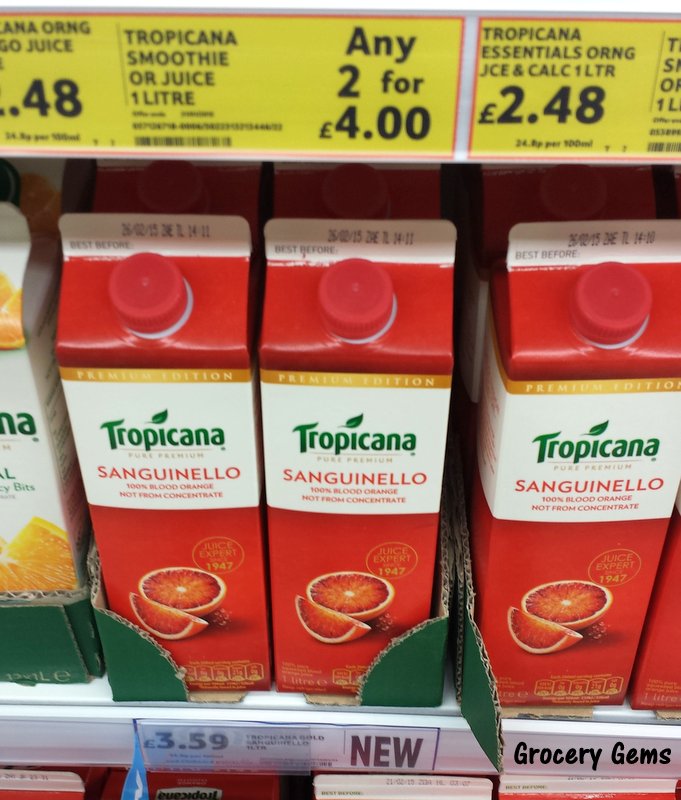 Tropicana Sanguinello: There are several new releases in the Tropicana juice range at the moment. The Sanguinello is made with 100% Blood Oranges. £3.59p at Tesco. 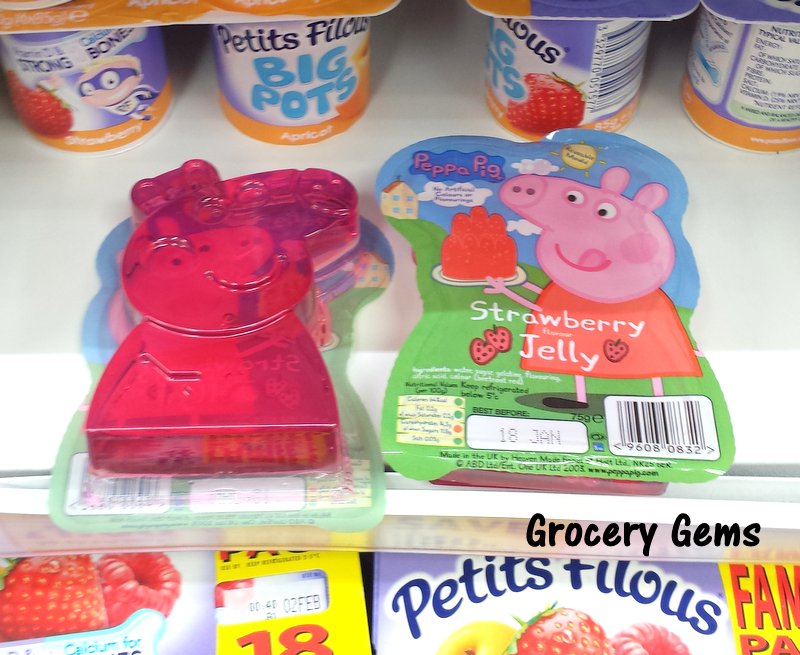 Peppa Pig Strawberry Jelly: I'm not sure if these are new but it's the first time I've seen them in my local Tesco. These individual Peppa Pig shaped jellies are really cute for a lunchbox treat. They are £0.50p each at Tesco. 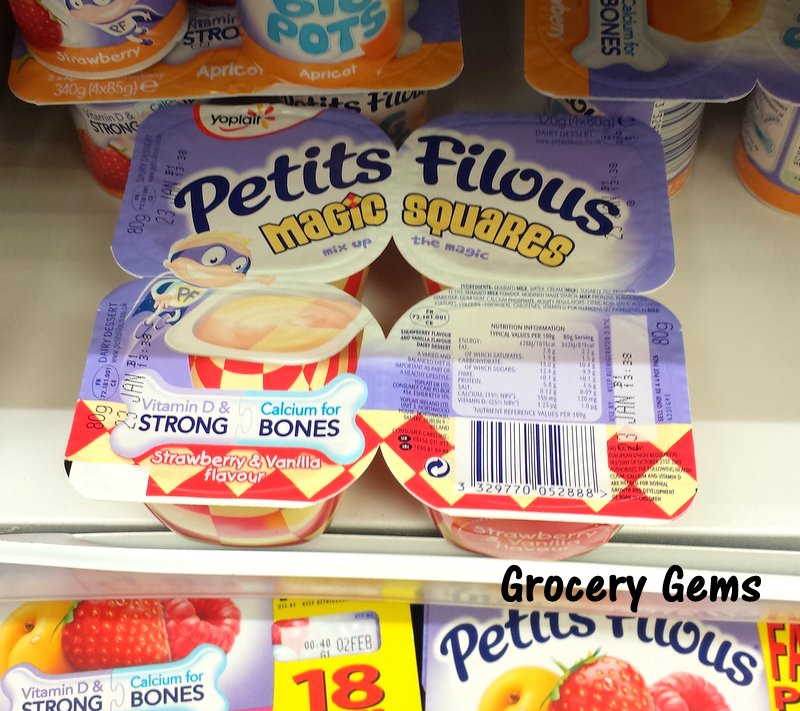 Petit Filous Magic Squares: My kids are fans of the Munch Bunch Double Up yogurts (even though they're far too old for this stuff!) and I couldn't help myself picking up this similar looking offering from Petit Filous - Magic Squares. Instead of being half strawberry and half vanilla yogurt, like the Double Up, the Magic Squares are actually sectioned into quarters. £1.85p at Tesco. 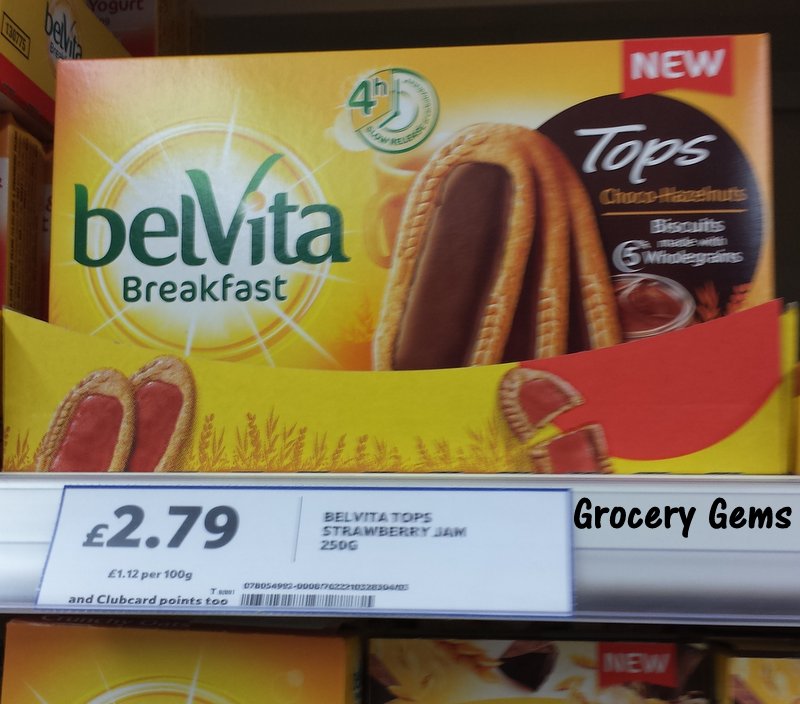 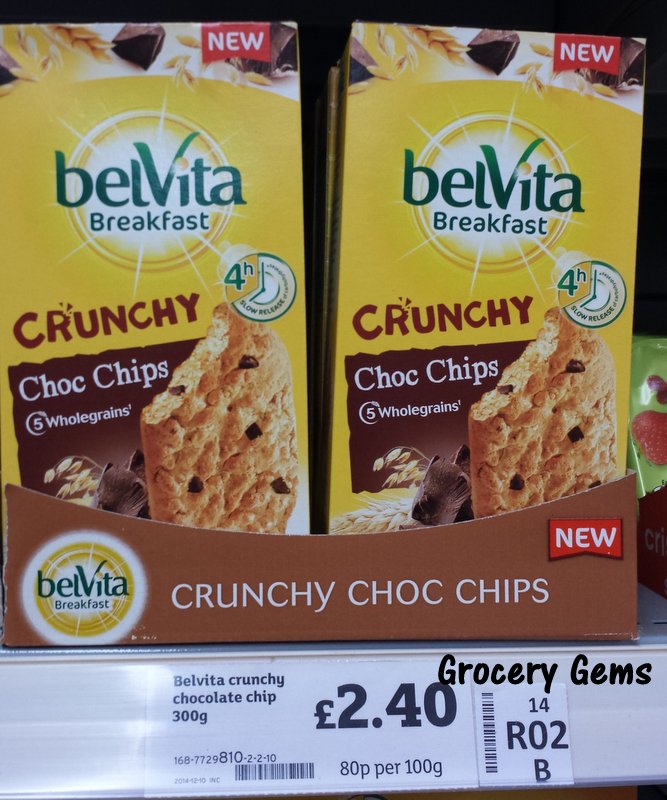 Belvita Breakfast Crunchy Choc Chips: Probably not that new, but also available in Apricot and Hazelnut varieties. £2.40p at Sainsbury's. 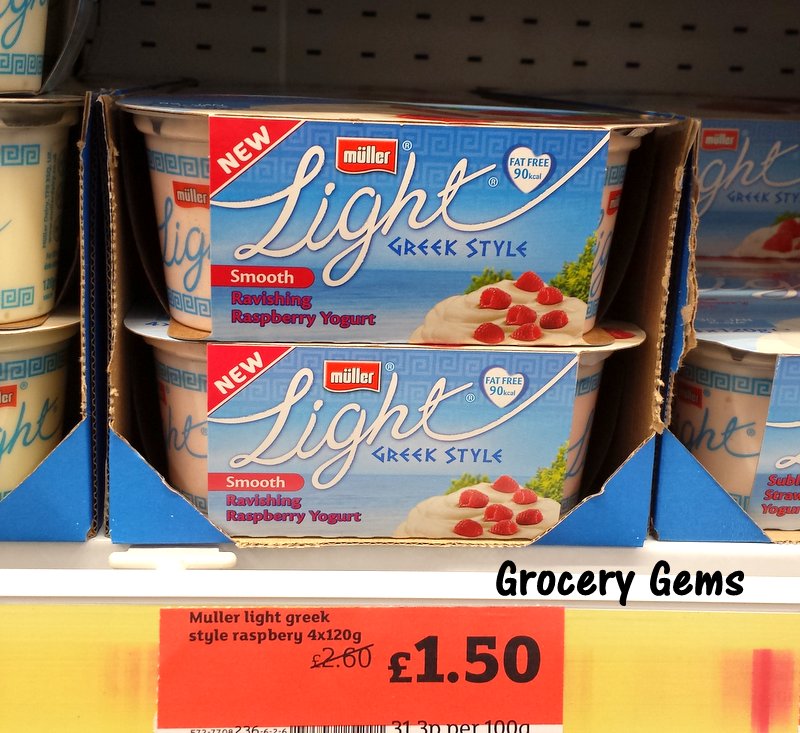 
A big THANK YOU to Lucy W. who emailed me the following photos of new products that she bought in Tesco - most of which are not available in my local Tesco yet! 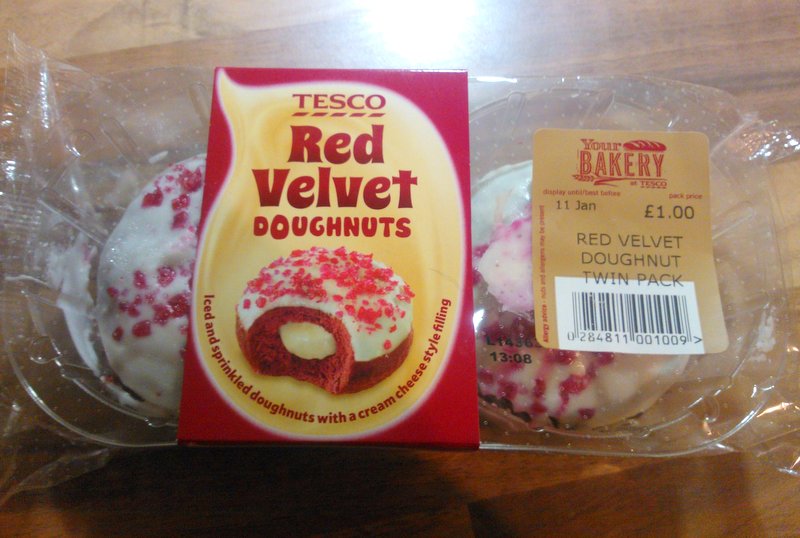 Tesco Red Velvet Doughnuts: These look much more appealing that the first doughnuts in this post! However, Lucy found that they were a little disappointing in terms of the filling. I'm hoping to find them and the Red Velvet Cookies (see below) soon - I have to check a bigger Tesco! £1.00p for a twinpack at Tesco. 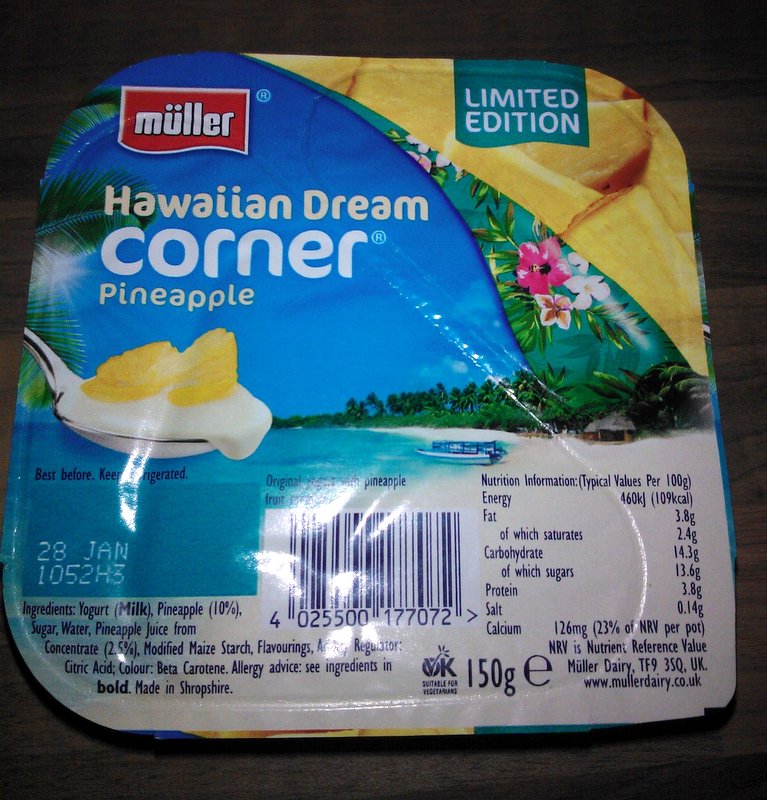 Müller Corner Hawaiian Dream Pineapple: I definitely haven't spotted this one in store yet - I would have snapped it up! It reminds me of the Müller Inspired by Bali yogurt from last year, but it looks like the Hawaiian one is pineapple flavoured rather than coconut. 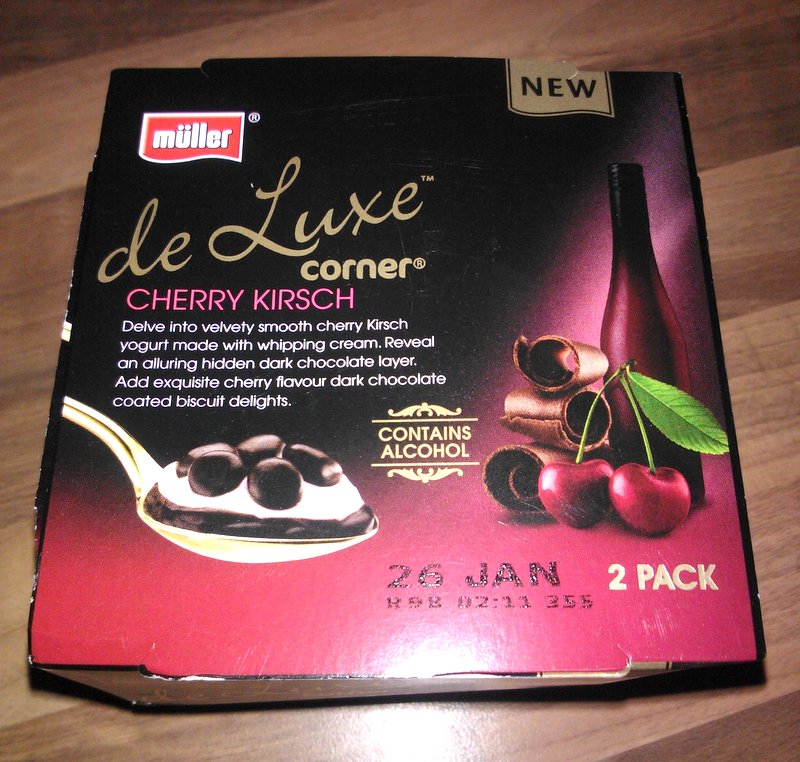 Müller de Luxe Corner Cherry Kirsch: Another decadent looking flavour from the Müller de Luxe range. Like a few of the previous flavours in this range, this one also contains alcohol. 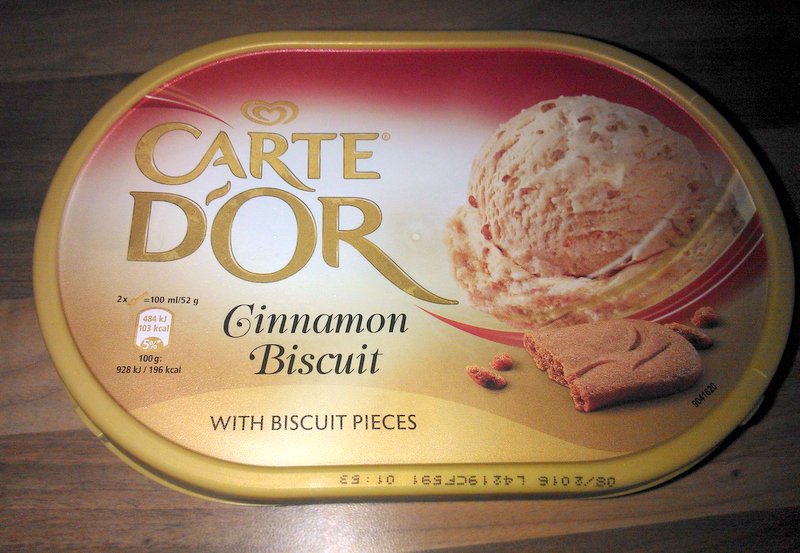 Carte D'Or Cinnamon Biscuit: Oh wow I really need to try this one! From the packaging it looks like a Speculoos biscuit ice cream! £3.49 at Tesco.

Tesco Red Velvet Cookies: I haven't managed to spot these yet so thank you to both Lucy W. and another reader who left a comment letting me know about that they are now instore available instore. Apparently they are a Red Velvet version of the Tesco Melting Snowman Cookies.


Thanks again to Lucy for the last few photos - we obviously have very similar tastes as I really want to try all of those new products!

Don't forget if you spot any new products in store please let me know via email - grocerygems@gmail.com. Thank you!