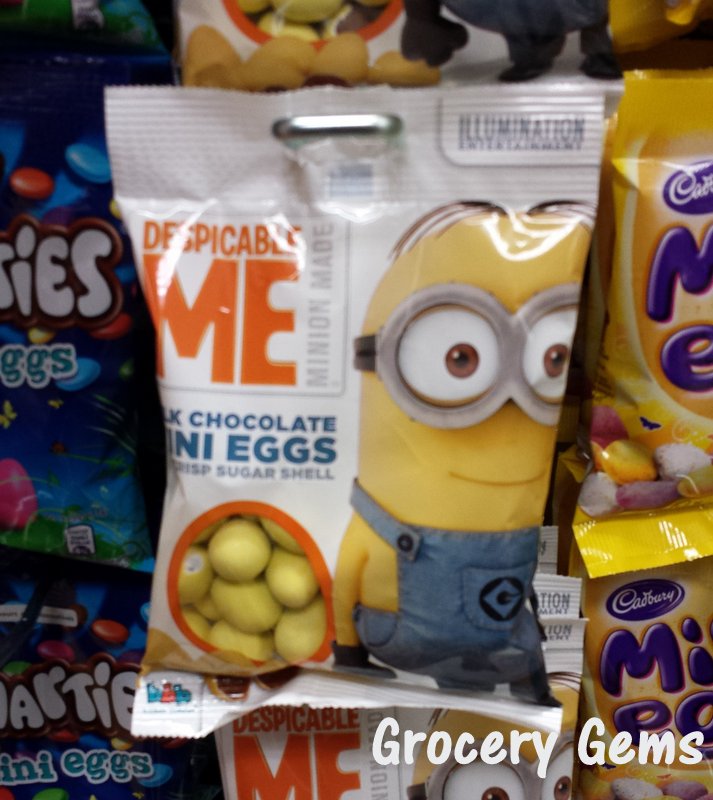 Despicable Me Minions Mini Eggs: The ever-popular Minions are back this year with their own movie so I suspect we'll see lots more Minions branded products in the next few months. These milk chocolate Mini Eggs look pretty much like any other mini eggs except they're all yellow. They'd probably be good for Easter themed baking projects. £1.00p at Poundland. 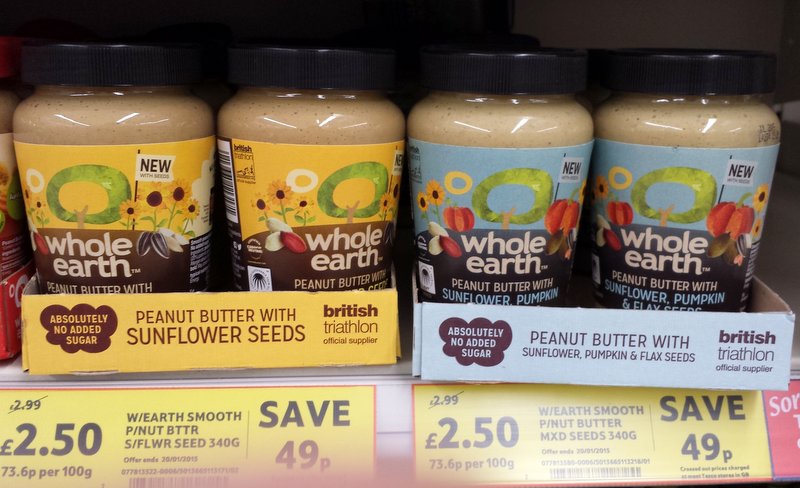 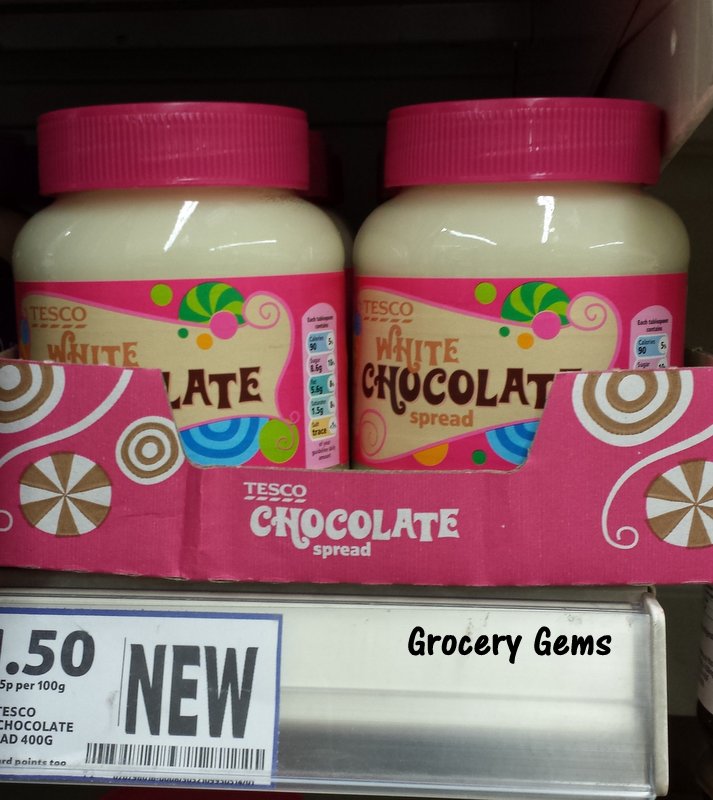 Tesco White Chocolate Spread: A few months ago, Tesco held a competition to decide the next biscuit inspired chocolate spread, and they recently announced that the winner is the Millionaire's Shortbread Spread, which should be available soon. Meanwhile, I spotted a White Chocolate Spread which I don't think I've seen in my local store previously. £1.50p at Tesco. 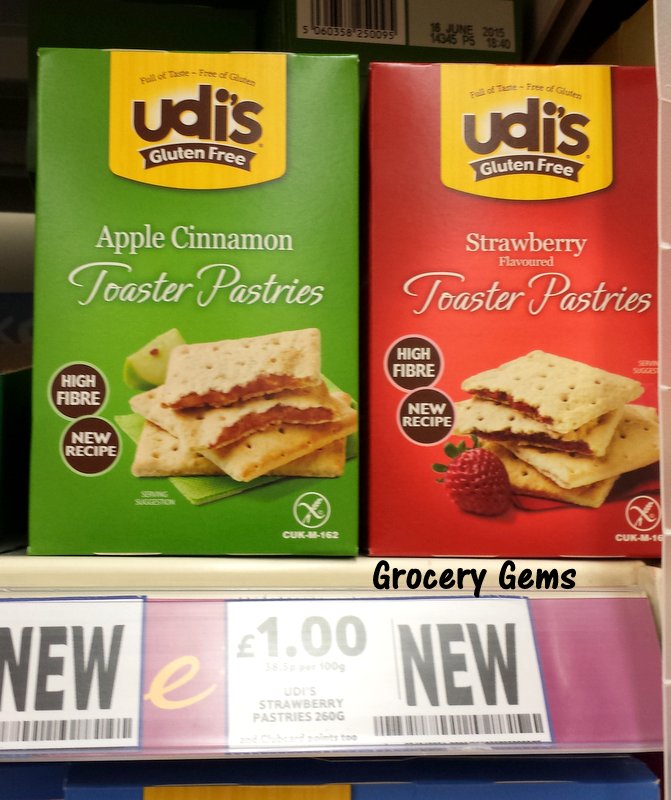 Udi's Toaster Pastries: I spotted these slightly healthier version of Pop Tarts in the "Free From" section of my local Tesco. They were only £1.00 for a box of 5 so I picked up both flavours to try, Apple Cinnamon and Strawberry - review coming soon! £1.00 at Tesco. 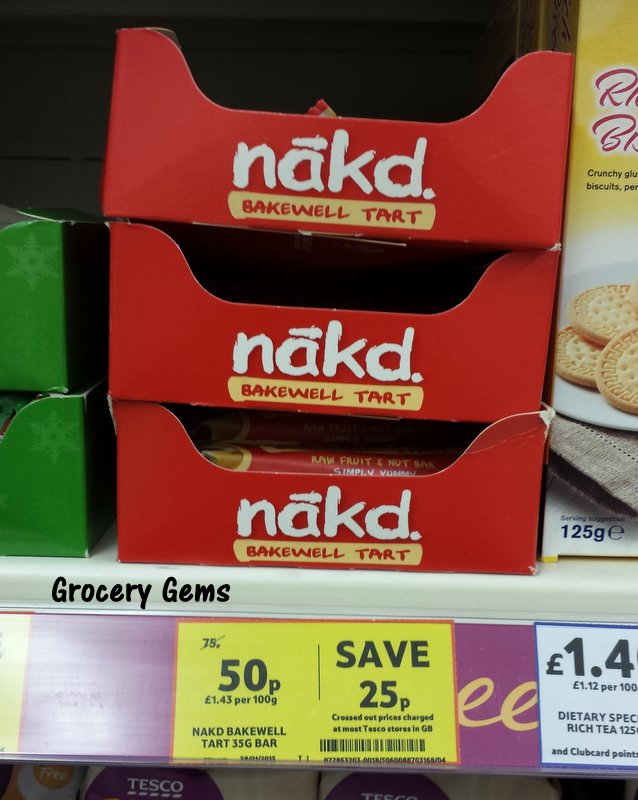 Nakd Bakewell Tart: I know this flavour came out before Christmas but I've had the hardest time trying to find it. The Nakd Bakewell Tart bars are finally available in my local Tesco and even better the whole Nakd bar range is on offer for £0.50p each at the moment. I stocked up on a few more of the Nakd Christmas Pud bars! 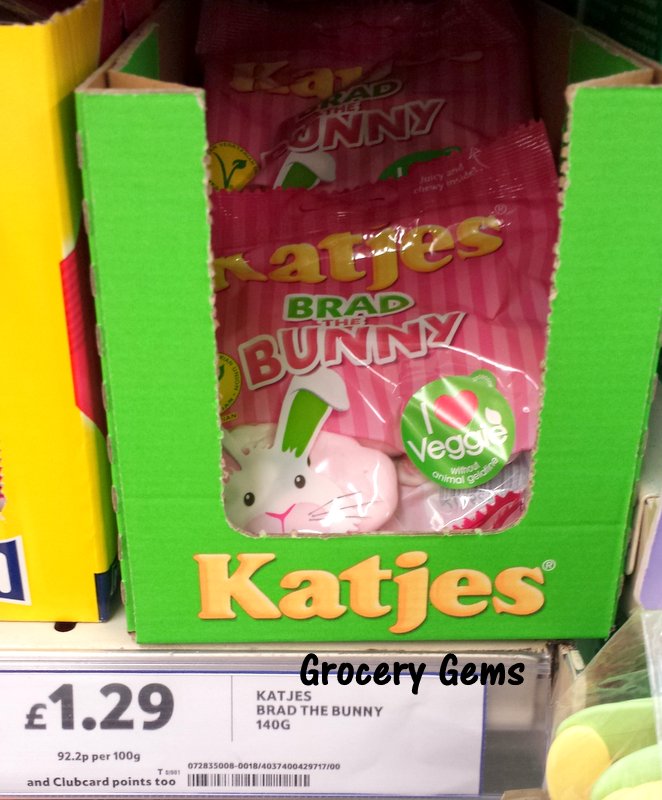 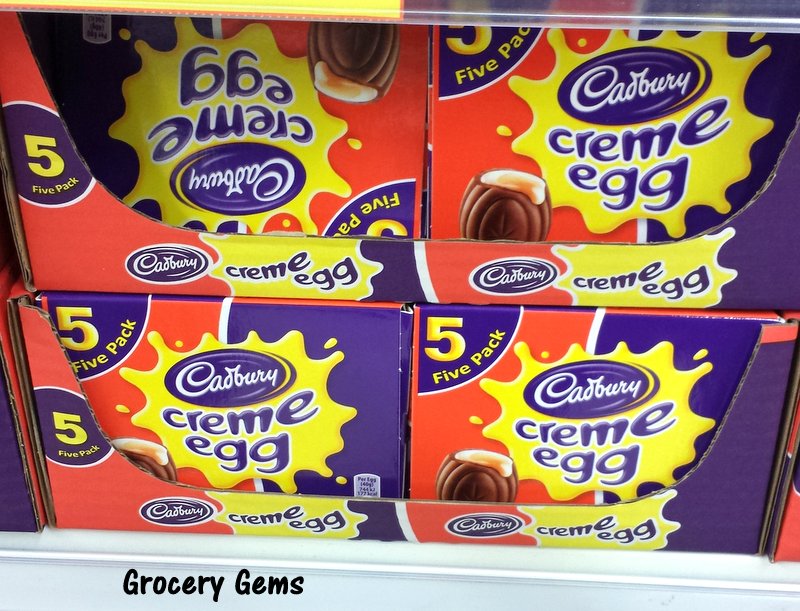 Cadbury Creme Eggs Five Pack: If you're on Twitter, you may have noticed the outcry that occurred when Cadbury confirmed that they have changed the recipe for Creme Eggs, from using Dairy Milk chocolate (around 20% cocoa solids), to using a "standard cocoa mix" (supposedly around 14% cocoa solids). To add even more insult, the traditional Cadbury Creme Egg multipacks will now only contain 5 eggs instead of 6. Bad decision Cadbury, very bad. £2.00p at Tesco. 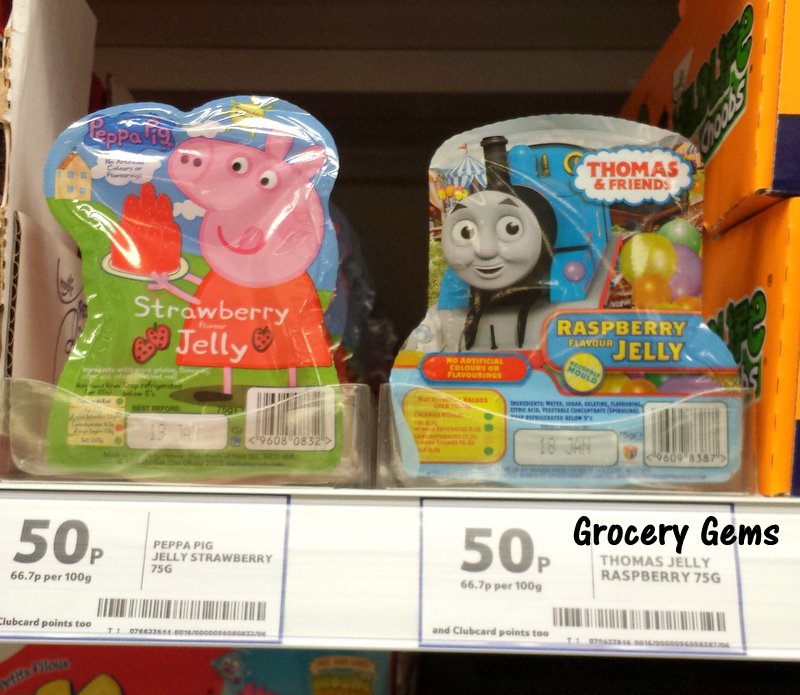 Thomas & Friends Raspberry Jelly: I couldn't get a decent picture of this but it's a really cute jelly for any Thomas the Tank engine fan. The jelly itself is actually a blue colour and shaped as Thomas himself. The little plastic pot that it comes in can also be reused as a jelly mould - brilliant! I bought one each for my kids even though they are far too old for Thomas the Tank engine. £0.50p each at Tesco. 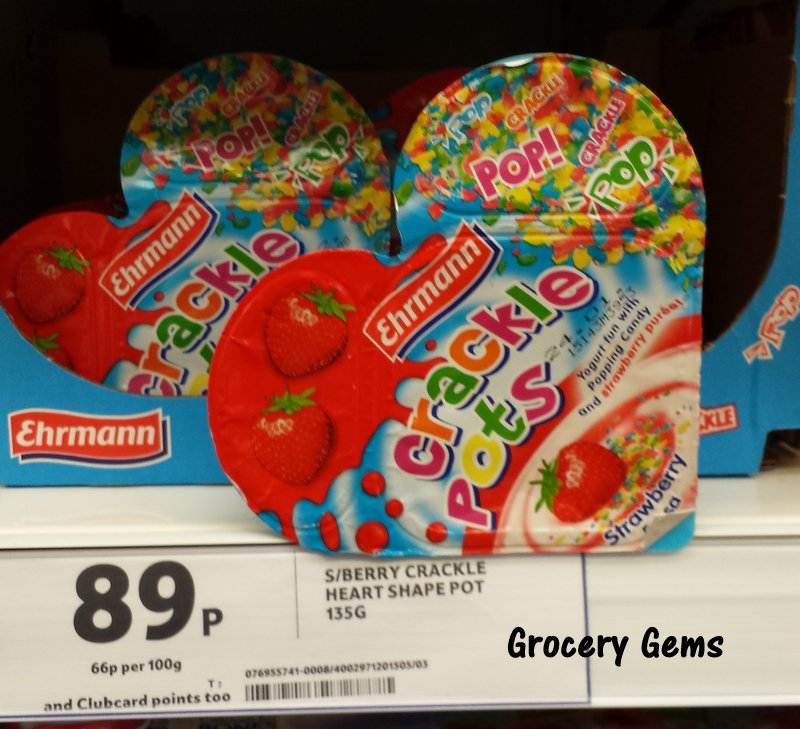 Ehrmann Crackle Pots Heart Shape: I also though these heart shaped yogurt pots were really cute. They have a large pot of yogurt in the middle with two sections making a heart shape, one with strawberry purée and the other with popping candy. Such a fun idea. £0.89p each at Tesco. 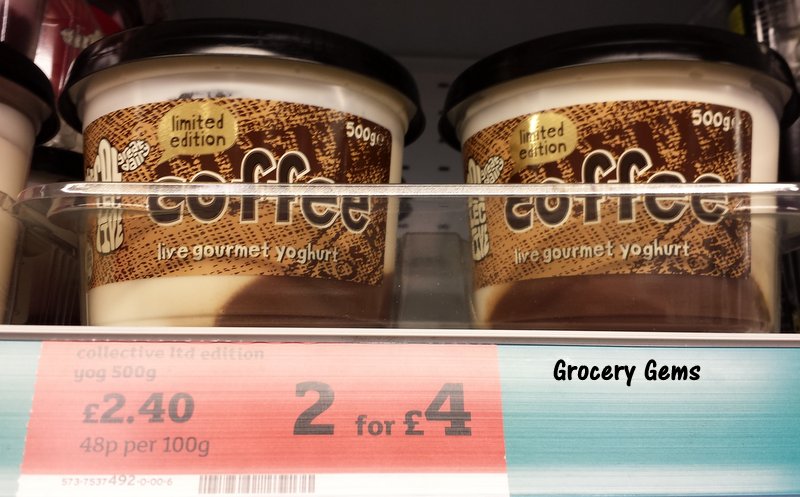 Collective Dairy Limited Edition Coffee Yogurt: The Collective Dairy have released some interesting seasonal flavours, from Pumpkin Spice to Xmas Pudding. Their new Coffee flavoured yogurt for January looks quite intense. If you've tried this one then let me know what you thought in the comments below. £2.40p at Sainsbury's.

A big thank you to Richard W. who sent me some brilliant new product finds via Twitter. These were all spotted at Sainsbury's. Thanks Richard! 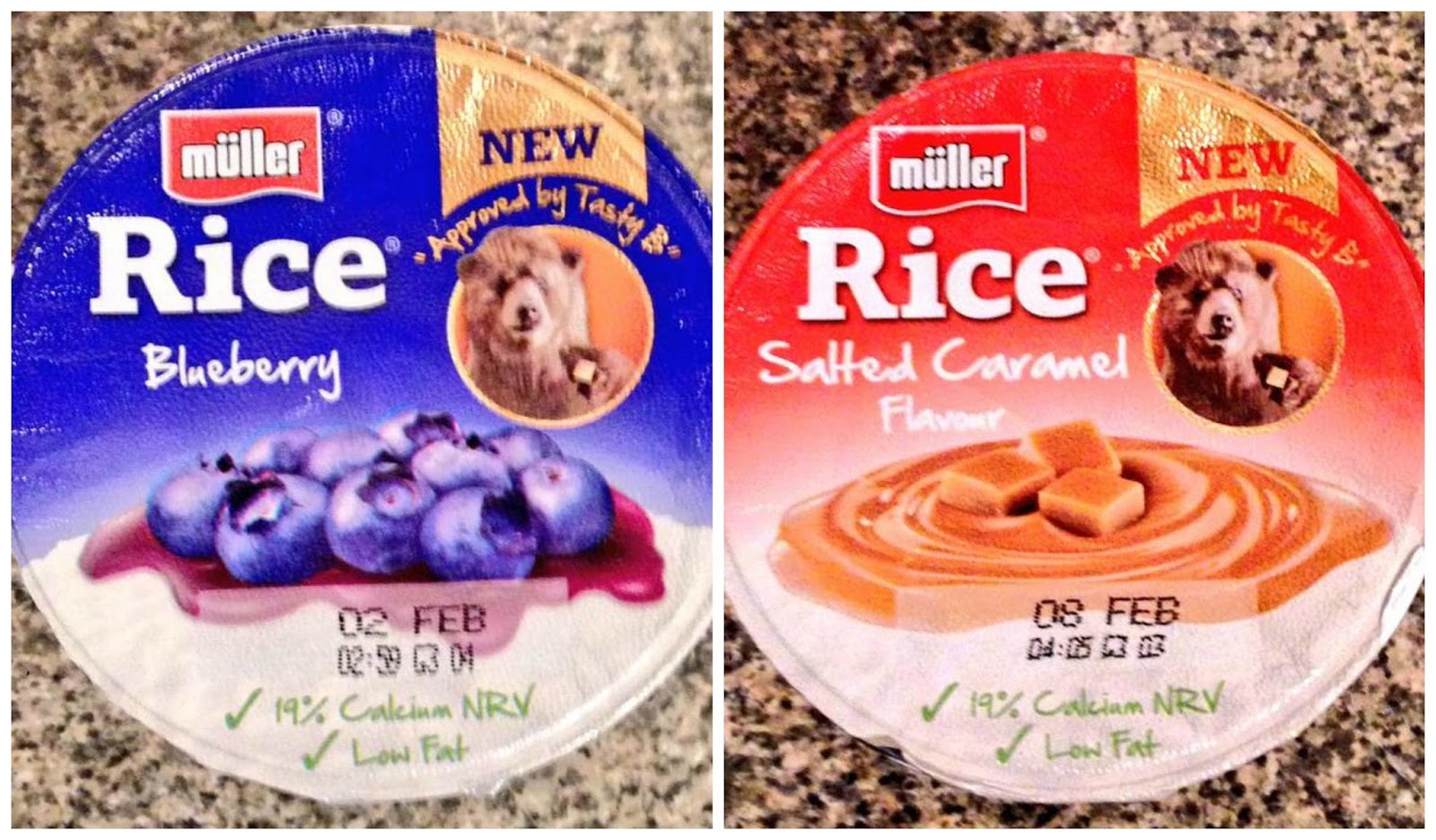 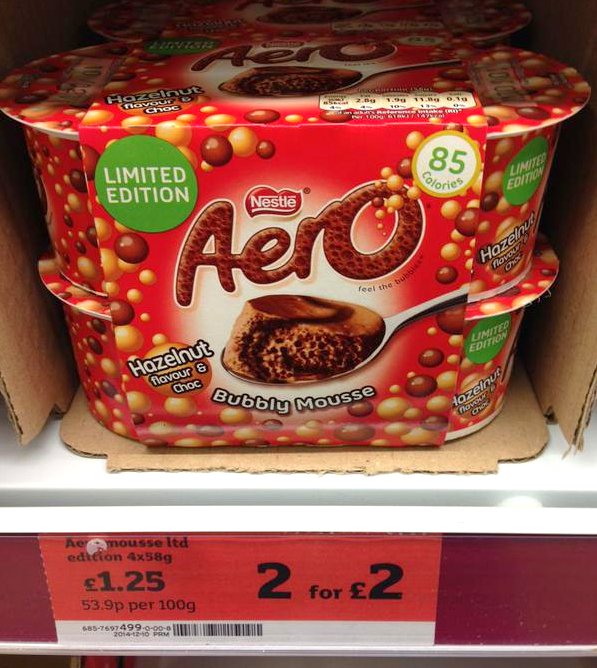 Aero Bubbly Mousse Limited Edition Hazelnut & Choc: I'm hoping that this will taste like a bubbly and light Nutella mousse! Watch this space as I'll definitely be reviewing this one. £1.25p at Sainsbury's. 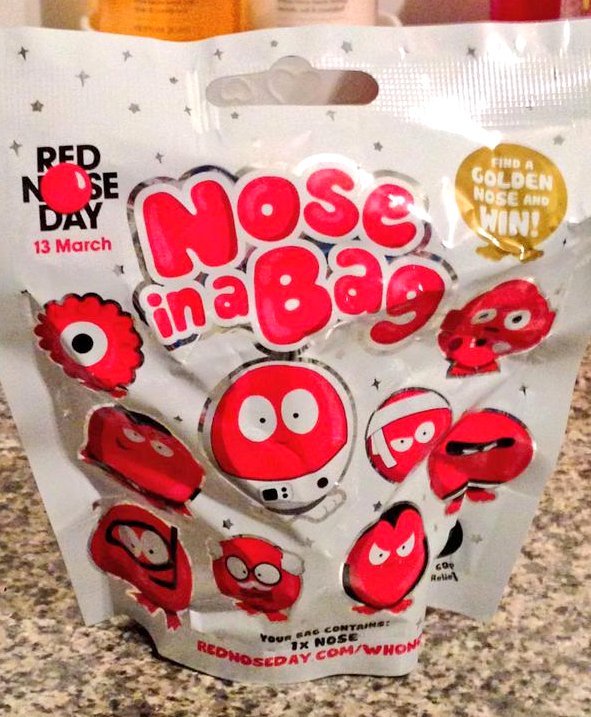 Thanks again to Richard. W. for the last photos! Don't forget if you spot any new products instore then I'd love to hear you. Email me at grocerygems@gmail.com.