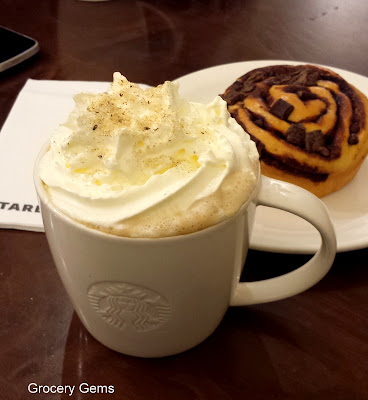 The red cups and spiced Gingerbread Lattes may have sadly disappeared from the Starbucks menu for another year, but at least January sees the return of the Vanilla Spice Latte to warm up the last few winter months. The Vanilla Spice Latte is flavoured with a vanilla & cardamom syrup and topped with a sprinkling of crushed vanilla bean sugar.

My husband  first tried the Vanilla Spice Latte a few days ago (with cream, photo above) and really enjoyed it, so I couldn't wait to try one for myself. I don't like cream so I always have my lattes without any. 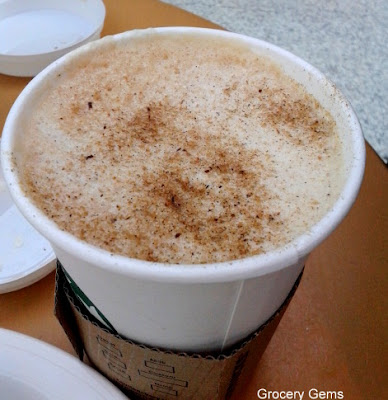 My Vanilla Spice Latte was thickly sprinkled with a vanilla sugar topping, creating a sugary crust on top. This sugary sprinkle had a sweet vanilla flavour that was joined by plenty of warming cardamom, with a little cinnamon in there too. The actual coffee itself had a very sweet flavour from the vanilla syrup but it's the cardamom that was once again the dominant flavour. I'm more used to cardamom as a flavour added to tea, to made a spiced chai, but it worked equally well with the coffee here, creating a latte that is a real winter warmer.

This is one of those drinks that people either love or hate. I certainly enjoyed it's warming flavours, and my husband did too. But my brother, who also tried it for the first time recently, hated it. He thought it tasted like flowery pot pourri, and there are plenty of comments online to suggest he's not the only one! I guess it all depends on how much you like cardamom, because that really is the strongest element in this drink.