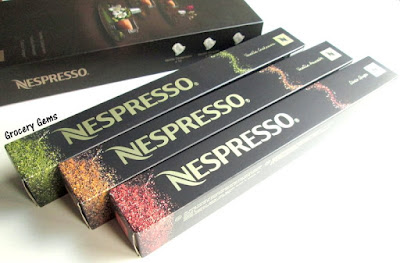 This year Nespresso has released three Limited Edition Variations (that's flavoured coffees to you and me) as part of it's festive range. The three new flaovurs are: Vanilla Cardamon, Choco Ginger and Vanilla Amaretti. I always look forward to finding out what flavours Nespresso will release for the Christmas period and I had high hopes for this years promising selection. The three new flavours were released a few weeks ago and will be available for the next few months. 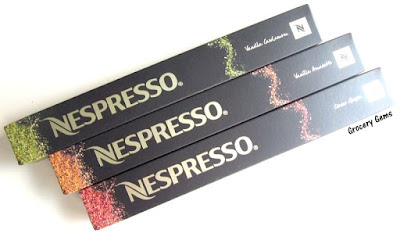 The sleeve packaging is gorgeously festive (especially compared to the 2014 Nespresso Limited Edition Variations), with a sparkly pattern on each of the boxes. 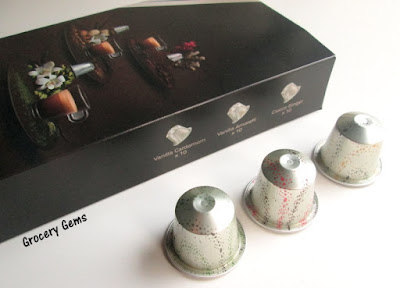 I purchased the Nespresso Limited Edition Variations Gift Set (shown above) which includes all three sleeves of the festive flavours and we've been testing them out for the past week. Here are my thoughts on each of the flavours:

Vanilla Amaretti: This was easily my favourite of all three of the 2015 Nespresso Variations. The flavour is a perfect representation of the name, with sweet hints of vanilla and baked almond biscuits coming through together. The balance of the two flavours is just right and also combines well with the base coffee. Rating: 9 out of 10.

Vanilla Cardamon: I enjoyed this as a vanilla flavoured coffee but I did find the cardamon flavour lacking. I was expecting more of a vanilla chai type flavour here and instead I couldn't taste much apart from the vanilla. Mr Grocery Gems disagrees with me here - he found the coffee to have a nicely spiced background flavour. Rating: 7 out of 10.

Choco Ginger: This one is my least favourite of the three, which is not really a surprise since I'm not really a mocha fan - chocolate flavoured coffees are just not my thing. The chocolate flavour comes through strongly with only the barest hint of ginger and ultimately I found the chocolate too overpowering. I would have preferred a stronger ginger flavour here to create a more balanced flavour. Rating: 6 out of 10. 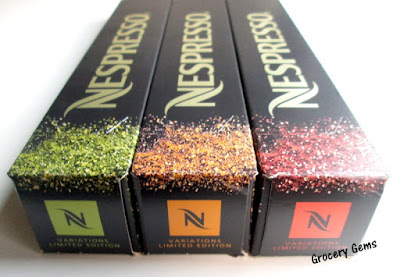 Overall, I was impressed by the 2015 Nespresso Variations, if only because they are so much better than last years flavours. My top pick would be the Vanilla Amaretti by far, but I'll still be buying a few more of the Gift Sets for family and friends as Christmas presents.

A quick note on the flavourings and ingredients. The base coffee used in these capsules is the Livanto Grand Cru with an intensity of 6.  The ingredients list natural flavours in each of the coffees. There are no added syrups or sugars.