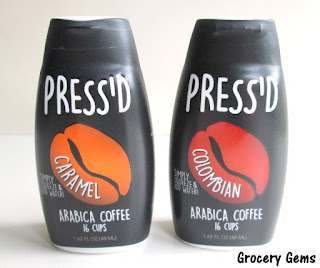 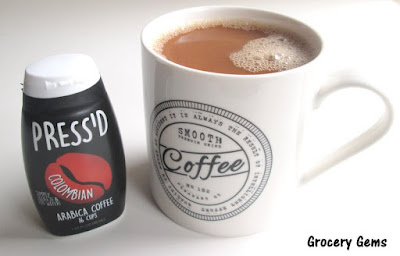 As expected the coffee is super easy to make. A quick squeeze adds a good amount of the glossy and thick coffee liquid. I added hot water (200ml is recommended, otherwise it will be too watery or need an extra squeeze) and a little almond milk. Even though I was excited to try the Press'd concept I have to admit I was a little sceptical as to how good the coffee would taste. Thankfully, I was pleasantly surprised by just how enjoyable I found both varieties. The coffee  has a lovely, smooth flavour that is quite rich and strong. It didn't froth up like my usual coffee does but it still has a satisfying flavour that is similar to a filter coffee.

The Press'd Caramel is made with natural flavouring rather than a sugary syrup, so it's not too cloying or sweet. The caramel flavour is quite subtle at first but builds nicely with each sip. I don't usually enjoy flavoured instant coffees at all but this one was very enjoyable. The added flavour does not overpower the actual coffee itself which is how I prefer it.

Overall, I was impressed by both varieties of Press'd Arabica Coffee. The squeezy bottle is really handy and I can think of about a million scenarios where it would be useful!

Email ThisBlogThis!Share to TwitterShare to FacebookShare to Pinterest
Labels: Coffee