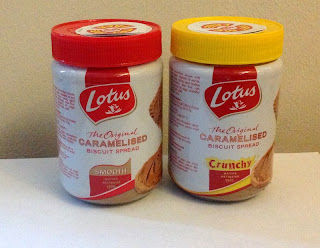 Lotus Caramelised Biscuit Spread is finally available in the UK, exclusively at Waitrose, which is fantastic news for foodies and vegans alike. There are two varieties available, Smooth or Crunchy, and being an indecisive person I bought both!

Belgian Caramelised Biscuits, or Speculoos as they are more commonly known, are deliciously simple biscuits flavoured with caramelised sugar and cinnamon. In the past these were my biscuit of choice, especially as they are so delicious with coffee. They taste very sugary, with a warming spicy undertone from the cinnamon. 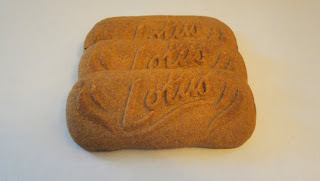 I was excited to finally get to try the Caramelised Biscuit Spread after so many years of wishing I could visit Belgium just to get my hands on some. I wasn't even sure how I should be eating it but since it's described on the jar as being fantastic on toast, I decided to keep it simple and stick to the advice. At first it tasted a bit odd to be eating a biscuit flavoured spread but I soon discovered that the combination was delicious. It has exactly the same taste as the Caramelised Biscuits but just in spreadable form. The caramelised sugar and cinnamon flavours tasted great with the hot toasted bread, and a decent cup of coffee on the side! 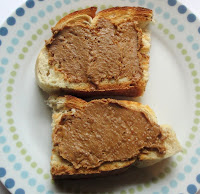 The Crunchy and Smooth varieties both have exactly the same taste so it's just down to whether you prefer the texture to be... crunchy or smooth. They are both yummy alternatiaves to peanut butter or chocolate spread. It's also suitable for vegans and I've already got my vegan brother completely hooked on it! If you have a creative side then it also works as an unusual ingredient to use in baking projects. I've already made a delicious banana bread by adding some of this spread to the mix and it turned out fantastically well. If you've tried and liked the original Lotus Caramelised Biscuits then you will love this spread. The only downside is that the jar's contents will disappear all too quickly!