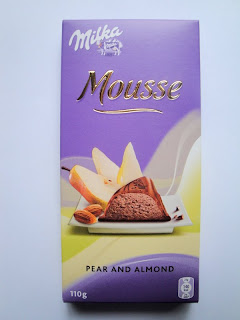 I couldn't resist buying this bar of Milka Mousse Pear and Almond chocolate when I saw it in a bargain store, it's such an unusual combination of flavours. These types of Milka bars are usually called Amavel but I have never seen this "Mousse" version for sale before, even though it is the same bar. 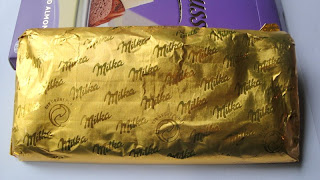 They come quite lavishly wrapped compared with other Milka bars I've tried. First there is a sophisticated cardboard outer box and inside is the gold foil wrapped chocolate. The whole package is also much thicker than a standard Milka chocolate bar. 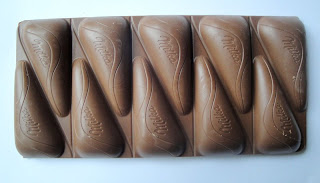 The chocolate has quite an unusual triangle segmented shape which is typical of the Amavel range. It still breaks off in rectangles with two triangles to each rectangle. At this point I couldn't detect any smell of pears or almonds, just the rich Milka chocolate. 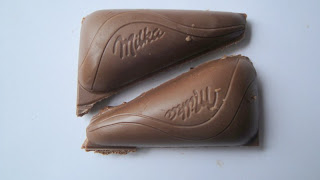 Inside the filling looks quite similar to any other truffle like chocolate. I don't know what I was expecting from the word "mousse" but in reality the texture is somewhere inbetween a truffle and a cream. If feels very soft and has a great melt in the mouth consistency. The colour of the inner mousse is slightly paler than the thicker outer chocolate covering. 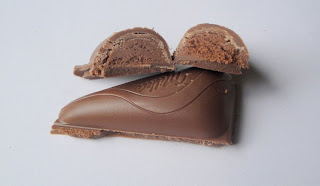 Unfortunately there is no detectable almond taste in this bar, which only matters because Milka chose to call it "Pear and Almond". In fact there is a nutty taste to the chocolate but it is not almond. Like most Milka chocolates there is quite a strong hazelnut flavour throughout the chocolate itself which works well with the overall flavour. Luckily Milka did not hold back on the pear flavouring, it is very strong and just like a fully ripe sweet pear. The flavour of pear works well with chocolate as pastry chefs have known for years. I'm always glad to see a chocolate maker stepping beyond the usual orange or strawberry when dreaming up a fruit flavoured chocolate. 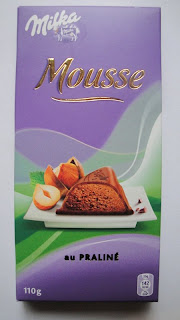 I bought the Milka Mousse Pear and Almond bar in a 99p Store, which is a complete bargain for this chocolate. They also had two other varieties of Milka Mousse available; Mousse au Praline and Mousse au Chocolat. These are both less exciting than the Pear and Almond but are still delicious. The Mousse au Praline in particular has a fantastic hazelnut flavour which compliments the Milka chocolate perfectly.

It's hard to tell from the minuscule writing on the back (which is all in a Cyrillic alphabet) where these bars originate but it is definitely somewhere in Eastern Europe. If you manage to find these bars then don't hesitate in giving them a try.