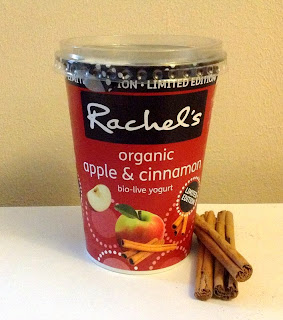 I love "limited edition" versions of favourite products because they tend to tie into the flavours for a new season or event. This Rachel's Organic Apple & Cinnamon bio-live yogurt is perfect for the colder months, even the rustic colours on the packaging evoke warming and comforting flavours. Apple & Cinnamon is already a classic combination in desserts and I was keen to try it in a yogurt format. Rachel's Organic only "use the finest organic ingredients" whilst making their yogurts "as simply as possible". That means there are no hidden nasties or laboratory sounding ingredients. 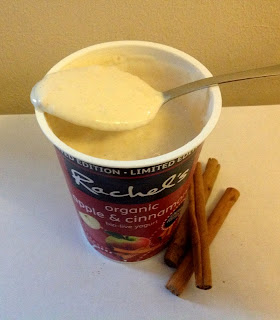 These yogurts come in quite large 450g tubs which provides about three servings. The base yogurt used here tasted extremely creamy and rich, just like the other yogurts from Rachel's. It does feel like I'm eating an indulgent dessert rather than a yogurt. The yogurt has been flavoured with organic cinnamon and adds a  gorgeously spiced flavour. I love the taste of cinnamon anyway but I had no idea it tasted so good with yogurt. The apple flavour comes through in the form of small pieces of apple within the yogurt. They are soft but still retain a sweet cooked apple taste. Combined with the cinnamon it tasted like a delicious apple pie of a yogurt.

As I dug deeper into the yogurt in my bowl I discovered a few raisins lying within. They tasted sweet and seemed to have taken on the apple and cinnamon flavour of the yogurt rather than tasting too raisin-y. I would have preferred this yogurt without any raisins. It's not that I don't like raisins by themselves but I don't really like them in food, I would always choose an apple pie or carrot cake that doesn't contain raisins. It's a small niggle though because there weren't that many raisins in my portion and I managed to avoid eating the rest of them!

Overall I liked the main flavours in this yogurt and I think it's fantastic that Rachel's Organic continue to bring out new seasonal varieties. Apple & Cinnamon is a great flavour combination and one that I wish we had more of in the UK (I'm looking at you Kellogg's Apple Jacks...).