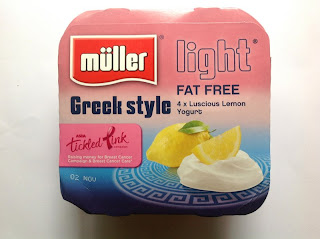 There are lot of adverts on TV at the moment featuring these yogurts, you know the ones, the women are not only in Greece but are also revealed to be centaurs when the cameras pan out. I didn't pay much attention to these adverts but when I saw the Coconut with a Hint of Vanilla variety featured on The Review Addicts' blog I knew I had to give them a try. They turned out to be deliciously creamy yogurts and the coconut and vanilla flavours were utterly divine. Since I can't eat chocolate and cake all day long, I often turn to yogurts to satiate my sweet tooth and these Müller Light Greek Style yogurts have provided the perfect alternative.

Müller have now added a Luscious Lemon variety to the range. I purchased a four pack of these yogurts in Asda for £1.50 (usual price is £2.19). The pack I bought was also tied to Asda's Tickled Pink campaign, whereby lots of ordinary products have had a pink makeover, which explains the pinker than usual packaging. 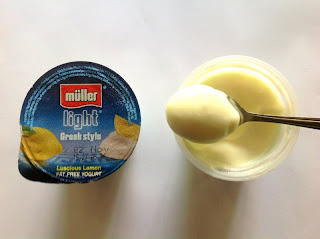 I'm not a massive fan of lemon yogurts or desserts in general but these Luscious Lemon are extremely tasty. The smooth and rich yogurt has such a lovely thick texture that it's hard to believe this is a fat free yogurt. The lemon flavour is quite intense and fresh tasting and is well balanced by the sweetness of the yogurt. It doesn't have that awful artificial flavour that some fat free yogurts have.