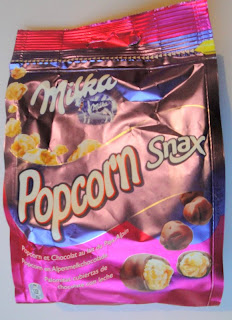 Another Milka product I have been lucky enough to try is the Milka Popcorn Snax. Milka Snax is a popular range of various types of chocolate treats which come in 130g sharing bags. They are widely available in Germany and other European countries but they have been spotted in some UK shops such as Home Bargains. 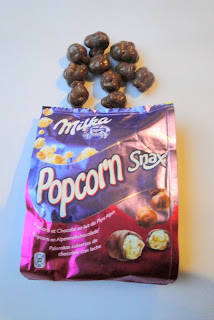 At first glance these Popcorn Snax look a lot like the recently released Cadbury's Choc Full of Popcorn. They have a similar glossy brown colouring and are identical in size too. There are however crucial differences in the taste. 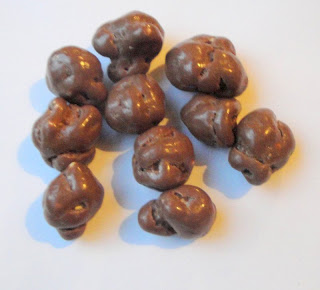 The Milka Popcorn has a delicious chocolate coating, it is smooth and melts easily in the mouth. The chocolate layer is quite thick and is just as delicious as other Milka chocolate. The Cadbury's popcorn has a slightly thinner coating which is different to the usual Dairy Milk offering. 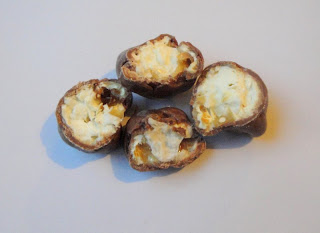 The inner popcorn in the Milka Popcorn Snax is very light and fluffy. Some of the popcorn pieces have a toffee coating but it is quite thin and the taste of toffee doesn't overpower the overall flavour of the popcorn. Because the inner popcorn is so fluffy it tastes wonderful with the chocolate coating and has a perfect level of sweetness. The texture combinations are interesting too; smooth and yet crunchy at the same time, melt in the mouth and yet chewy. It really is a fantastic snack.

This is all so much nicer than the Cadbury's version which far too thick a layer of toffee around each piece of popcorn. I wouldn't buy the Cadbury's popcorn again but I would certainly but the Milka version, it's just a shame the Milka Snax range is not readily available in the UK!