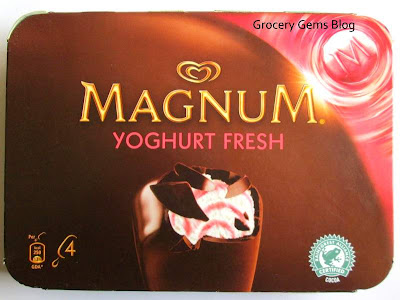 I'm always interested in new flavours of Magnum ice cream arriving in the UK - we're usually a couple of years behind the range that is available in continental Europe. I bought this pack of 4 Magnum Yoghurt Fresh ice creams in Sainsbury's, on offer for £2.00.

Out of all the new ice creams I've seen in the shops recently these were the ones I wanted to try first, although I'm also tempted by the new Magnum Loving Kiss.

From the outside they look just like a Magnum Classic as they both have the same chocolate covering. It's quite brittle and snaps easily and in large chunks. The chocolate flavour is smooth and satisfying, and adds a great crunch alongside the ice cream. 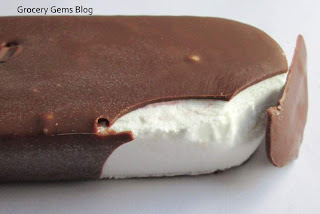 On first bite the raspberry swirls within the ice cream were not immediately evident, but soon enough a pink swirly pattern emerged.

The taste of the yogurt (sorry Magnum but I spell yogurt without the H) ice cream is not at all what I expected. Yogurt ice cream is usually quite tart and can have an almost sour edge to it. This ice cream is smooth, creamy with a very subtle yogurt flavour, that at first taste, is barely noticeable. It's a very sweet yogurt without any tartness. I don't mean to imply that the ice cream tastes the same as the usual Magnum ice cream, it's not the same at all. It doesn't have the milky creaminess or vanilla flavour that you would get from the Magnum Classic. However it's not purely an iced yogurt either. It's more of an ice cream with added yogurt. 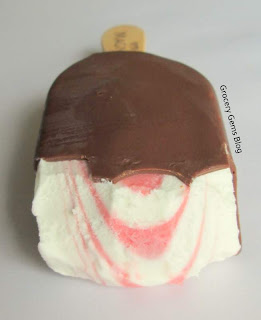 There is some tanginess to the flavours but that mostly comes from the raspberry swirls, rather than the yogurt, and is quite subtle. Having said that, the fruity flavour is still more of a sweet flavour rather than a tangy one. Combined with the smooth, creamy yogurt flavour I can see why Magnum have called this "Fresh". It's certainly feels less heavy to eat than a regular Magnum, despite the fact that it has practically the same number of calories. I've always thought that the main selling point of yogurt ice cream is that it's a "healthier" option. The levels of calories and fat are only marginally less than the Magnum Classic. The Magnum Yogurt Fresh has 250 calories and 15g of fat, whilst a Magnum Classic has 260 calories and 16g of fat.

Overall, the Magnum Yoghurt Fresh does provide a lighter tasting alternative to the rest of the Magnum range, even if the calories don't reflect that.