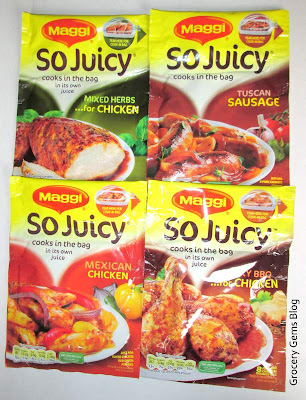 I was sent a range of Maggi So Juicy "cooks in the bag" recipe mixes as part of a Bzzagent campaign. The four varieties I received were: Mexican Chicken, Tuscan Sausage, Sticky Barbecue Chicken and Mixed Herbs for Chicken. I decided to try the Mexican Chicken first as we are all fans of Mexican flavours. 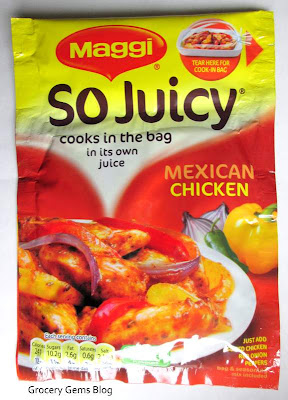 The premise of these sachets is very simple. Each one comes with it's own special cooking bag and separate seasoning. The meat simply needs to be placed in the bag with the seasoning (and vegetables if applicable). This allows the meat to cook in it's own juices, keeping it tender and "so juicy", without the need for any additional oil. Vegetarians look away now. 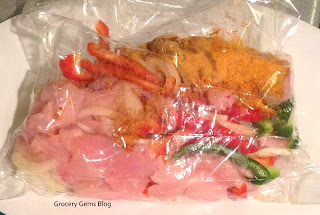 I'm sure no one really wanted to see the bag or raw chicken with peppers and seasoning, but there it is. Then all I needed to do was carefully mix (read: shake like crazy) the seasoning with the chicken once it was all in the bag. 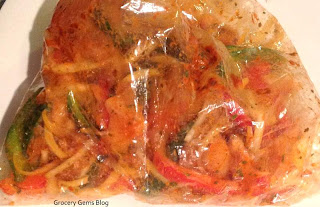 All shook up and ready to go in the oven! I'll admit that I was sceptical to how tasty something that was cooked in a bag could actually be, but it turned out to be a resounding success with all the fussy eaters in the family. 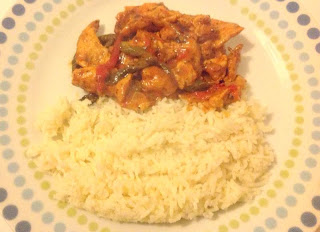 Apologies for the terrible photo! The chicken was extremely moist and tender, which in itself is no easy task considering how dry chicken breast can be - especially without any extra oil. The chicken was cooked to perfection with minimal effort on my part. The seasoning had a good, but quite mild, Mexican flavour. I would have preferred a more spicy Mexican flavour, but this is definitely a meal that the whole family can enjoy, especially the younger members.

Overall, these are a great cupboard standby for busy days and are a foolproof way to produce a tasty meal. It's also good to know that the Maggi "So Juicy" range doesn't contain any artificial colours, flavours or preservatives; although they do contain ingredients such as salt, gluten, lactose and milk.

I was sent this product to try out as part of a Bzzagent campaign to share my honest opinion.

RATING: 7 out of 10.
Buy them again?: I'll be trying some of the other varieties.
Purchased: Available at most supermarkets.
Price: £0.99p.
Posted by Grocery Gems at 20:10