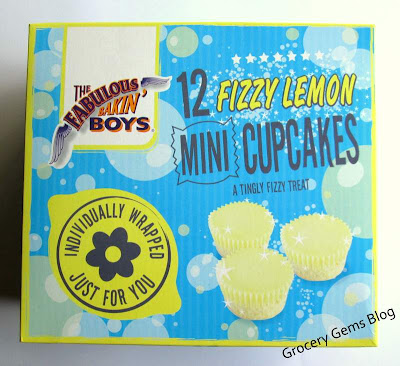 I haven't bought any cupcakes from The Fabulous Bakin' Boys range for a long time, but the packaging of these new Fizzy Lemon Mini Cupcakes really sold it to me. Look! Sparkly Cupcakes! 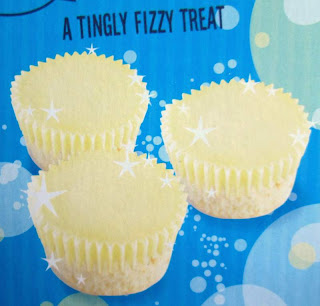 The cupcakes come in a box of 12 miini sized cupcakes, all individually wrapped. 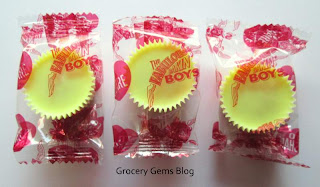 If you've had their mini cupcakes before then you'll know that they are very small indeed. However they are the perfect size for school lunch boxes (as dictated by many schools). 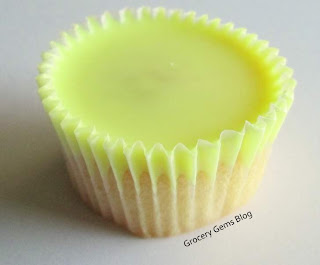 My camera didn't seem to like the colour of these cupcakes, it kept showing up as a lurid green no matter what lighting I tried. In reality the topping is quite a pale yellow, with a slight hint of green. The cakes are described as "Lemon flavour topped mini cupcakes on a lemon flavour sponge". There are no clues as to where the "fizziness" is hiding, but I assumed it would be within the topping. 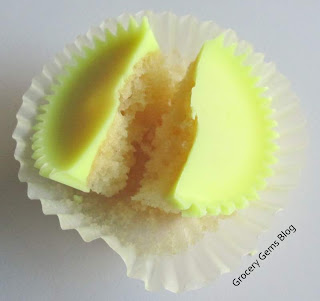 The sponge part of the cake was light and fluffy but a little greasy for my taste. It did, however, have a lovely lemon flavour. The topping is the usual for The Fabulous Bakin' Boys' cupcakes, it's quite waxy, very sweet and a little cloying - although I do prefer the taste in these lemon muffins compared to the chocolate ones (unless they are coconut and chocolate!). Having eaten a few of these Fizzy Lemon cupcakes, I'm still not entirely sure what the "fizzy" part of the name is referring too. I couldn't detect any fizzy flavour, although that might be because I was expecting a popping candy sort of effect. Instead there is the occasional burst of extra lemon flavour within the sponge, making them a very tasty lemon cupcakes, but not a fizzy one. 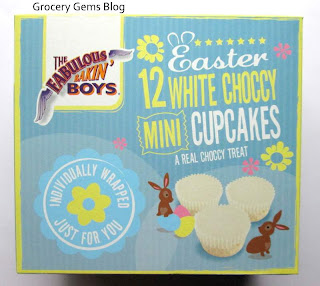 There are also these Easter packaged White Choccy Mini Cupcakes available at the moment and a Triple Choccy version.

Grocery Gems Verdict: Fabulous Bakin' Boys Fizzy Lemon Cupcakes
Overall, the Fizzy Lemon Cupcakes do have a lovely lemon flavour and if you're a fan of Fabulous Bakin' Boys cupcakes then they're definitely worth a try. However, I was disappointed by the lack of fizziness.
RATING: 5.5 out of 10Buy them again?: Probably not.
Nutrition (per cupcake): 47 calories, 0.3g protein, 5.9g carbs (4.2g sugars), 3.1g fat.
Purchased: Sainsbury's
Price: £1.00.