This is a Czech chocolate bar produced under the Orion brand (owned by Nestlé) that I bought in a local grocery store. The full name is Banány V Cokolade, which I would like to think means Banana Versus Chocolate (even though it actually means Banana In Chocolate). 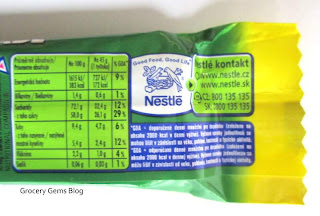 Some of you may know me as a bit of a coconut addict but I'm also a fan of banana flavoured snacks. I've always been on the search for a decent banana ice cream (oh Pirulo how I miss you), so if you have any recommendations for that please let me know. I actually bought an ice cream maker just so I could make banana ice cream. That's how obsessed I am. But enough about ice cream, let's talk Banány v Cokolade.

The shape is just like a banana that has been dipped in chocolate - fully fitting for a confection called Banana In Chocolate. 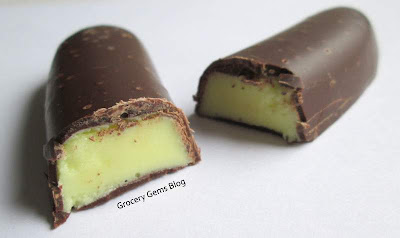 The chocolate may be dark in colouring but it's not really a serious dark chocolate. It's the sort of basic sugary dark chocolate that just tastes sweet without any intense cocoa flavour. However, we all know that when it comes to banana filled chocolates - it's the centre that counts. I didn't buy something called the Banány to critique the chocolate. 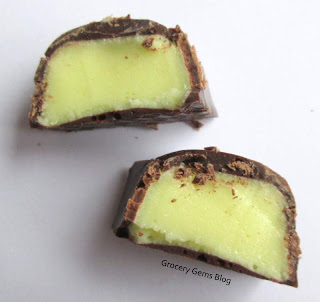 When it comes to a product like this, I'll guiltily admit that I don't want all-natural flavours. I want the sweet candy banana flavour that you get in foam banana sweets or banana ice lollies from an ice cream van. If I want natural banana flavour I'll just eat a banana. The Banány v Cokolade is not that kind of artificial bar, - it's actually made with all natural colours and flavourings. Unfortunately, there is only a mere hint of banana amid the sugary gelatinous texture of the centre, that in the end just didn't have much appeal. It's not the worst bar I've ever eaten, there is nothing horrible about any of the flavours, it just wasn't for me.

Email ThisBlogThis!Share to TwitterShare to FacebookShare to Pinterest
Labels: Around the World, Banana, Chocolate, International, Nestle