Rocky Chockas have been around for a few months, as a new addition to the Rocky biscuit range. One of the main differences with the regular Rocky biscuits is that these are not individually wrapped - but not to worry they've added some extra chocolate chips to make it worth your while! 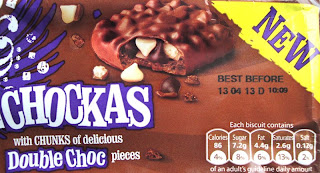 There are three varieties available; Double Choc, Toffee, and Honeycomb. I went for the Double Choc which, as the picture on the front shows, is a chocolate biscuit full of white and dark chocolate chips.

There are 7 biscuits in each pack which each have quite a knobbly and bumpy appearance to say the least! They certainly won't win any awards for attractiveness; the chocolate chips look like they are positively trying to escape from inside the biscuits. They are also a much smaller in size than the beast of a biscuit I was expecting. 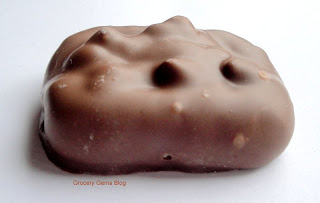 The chocolate layers are extremely thick and there is plenty of appeal here for most chocoholics. The biscuit layer along the bottom is quite crunchy, almost a little gritty, but that's exactly the same as other Rocky biscuits I have tried. As you would expect the whole thing is very very sweet, especially the generous chocolate coating. 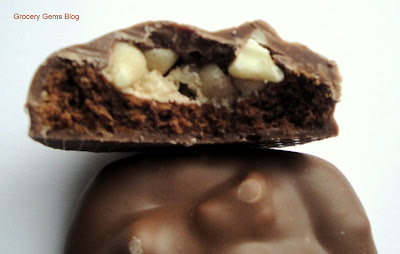 The inside of the biscuits don't look as choc full of chocolate chips as the picture on the front would suggest, but it's not far off. I like the way the chips retain their own distinct form even though they have been covered in chocolate. The dark chocolate chips have quite a strong cocoa flavour but the white chocolate ones were a bit lost, they needed to have more of a vanilla creaminess in order to stand out. Overall the dominant flavour comes from the super sweet chocolate coating surrounding the biscuit.