All this week I have been reviewing the new Kit Kat Chunky Choose A Champion 2013 additions. In this post you'll find a brief recap of each review and a link to the longer review if you want more! Once again the public will be asked to "Choose a Chunky Champion". The four new flavours for 2013 are: CHOC FUDGE, HAZELNUT, MINT, COCONUT. 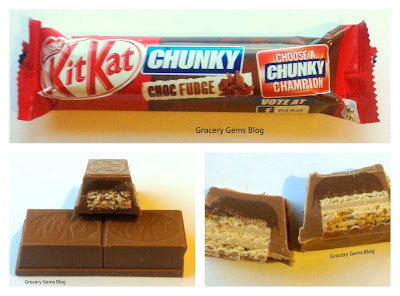 The Choc Fudge Kit Kat has a thick layer of rich chocolate fudge added inside the bar, just above the wafer. Although it doesn't sound very exciting the fudge is delicious with an almost butterscotch flavour to it - it's certainly a more grown up fudge flavour than I was expecting. The chocolate fudge is substantial enough to hold it's own against the wafer layer and thick chocolate coating. Read my full review here. 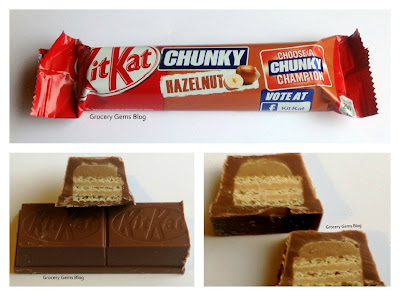 The Kit Kat Hazelnut also has a separate layer within the bar. This "hazelnut cream"  has an unmistakeably hazelnut flavour, but it has been mixed with a fudgey creamy concoction. The hazelnut flavour is strong and does succeed in dominating the wafer and chocolate, but I would have preferred a chocolate based hazelnut flavour instead. The sugary nature of the hazelnut layer was far too sweet for me. Read my full review here.

MINT
GROCERY GEMS RATING: 7 OUT OF 10 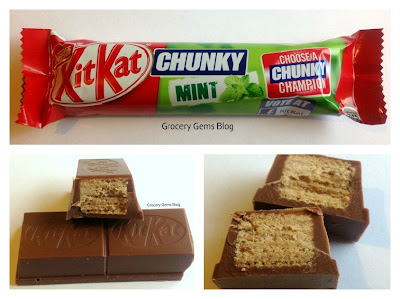 Unlike the previous two bars there is no separate layer in this Kit Kat Chunky Mint.  The mint flavour is all in the outer chocolate and it certainly packs a minty punch. At first it tasted of a very sweet mint but once the chocolate flavour ebbed away there is a lingering fresh mint edge. It's full of minty flavour and I expect it will be a big hit with fans of mint chocolate. Read my full review here. 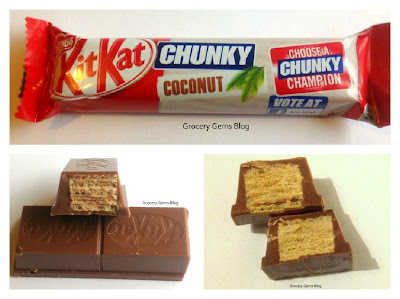 Not only is this the most original flavour of the bunch it was also my overall favourite. Again, there is no separate layer inside, all the coconut flavour is in the outer chocolate and it's a gorgeous combination. The coconut is sweet and quite subtle but is still strong enough to satisfy coconut lovers. As I'm a fan of coconut, I would have liked an additional layer of coconut cream in between the wafers. Despite this, the coconut flavour in the chocolate does hold it's own well against the wafer layers. Read my full review here.

I hope you enjoyed my Kit Kat Chunky Champion 2013 round up. Do let me know which one you will be voting for by leaving a comment below!