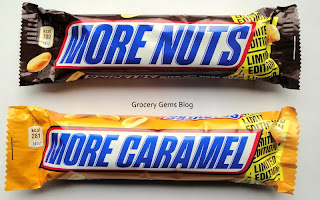 The chocolate fanatics amongst you will know that the Snickers More Nuts has been around before (in 2010). It's been released again, along with a new More Caramel version. Apparently this is the first time that Mars Chocolates (the company behind Snickers) has introduced two limited editions to the "same brand at the same time".

There is nothing radically new about either of these limited editions. I'm going to assume for the purposes of this review that everyone reading this has tried a Snickers, or maybe it was a Marathon, at some point in their lives. The Snickers More Nuts is extremely similar to the regular Snickers. There is a the same delicious peanut flavour and aftertaste, but it's just a little more intense.
Extra peanuts have been crammed into the nougat layer giving the nougat an almost peanut butter type flavour. Almost. Anyone who already loves a Snickers bar will undoubtedly enjoy this More Nuts version.

The Snickers More Caramel is slightly different. As you can see from the cross section below, there is no nougat layer. Anyone who tried the Limited Edition Mars Caramel, which also removed the layer of nougat, will have reached the conclusion that the nougat is an essential part of a Mars Bar - it was just too bland without it. Is it the same for the Snickers More Caramel? 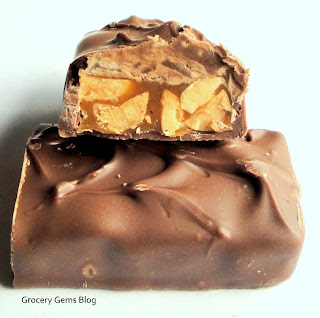 The Snickers More Caramel is certainly not as bad. There are plenty of peanuts inside the caramel which stop it from becoming a bland mess. However it still doesn't have the same appeal as either a regular Snickers of the Snickers More Nuts. The overall flavour is just too sweet and the texture too soft, especially the nuts. If the nuts had a bit more crunch to them then I think this bar would work a lot better. But they don't. 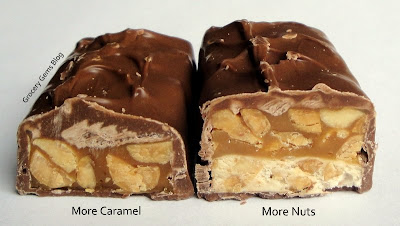 The More Nuts is definitely the winner of the two for me. It's just like a Snickers but with even more flavour. The More Caramel is smaller (54g versus 58g) and has less calories but is nowhere near as tasty.