Following on from my reviews of the Coconut and Mint varieties, here is the Choc Fudge bar from the new Kit Kat Chunky "Choose a Chunky Champion" range. 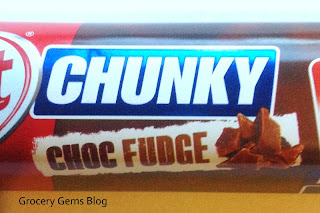 I was quite eager to try this bar but for some reason it has proved to be the hardest to find. I finally found it today in a local Premier Store.

The Coconut and Mint Kit Kat Chunkys both consisted of flavoured chocolate with a plain inner wafer. The Choc Fudge is completely different. The chocolate fudge flavour is inside the bar, in the form of a separate layer of fudge filling. On the wrapper it's described as "Crisp wafer finger, with a chocolate fudge filling (19%) covered in milk chocolate". 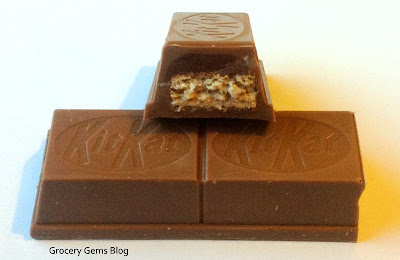 I could smell a definite fudge quality to the chocolate as soon as I took it out of the wrapper. It's not the same as the super sweet and sugariness of a Cadbury's Fudge, it's more buttery with a hint of burnt toffee (I mean that in a good way!). 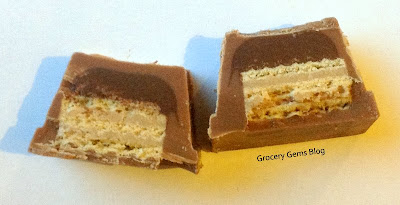 In the above photos of the filling, you can see that the wafer is topped by a layer of the chocolate fudge. It is darker in colour than the outer chocolate covering but I wouldn't say it is dark chocolate as such. The fudge layer is quite thick and is full of flavour. The taste is exactly as the smell promised, it has a delicious butterscotch flavour to it which I loved, it's certainly a more grown up fudge flavour. The chocolate fudge is substantial enough to hold it's own against the wafer layer and thick chocolate coating.

My only criticism is that the combination of the outer chocolate and inner fudge becomes overly sweet, possibly because there is less wafer to break up the flavours. This bar tastes much sweeter than the coconut or mint variety and I would personally find it hard to eat all in one sitting. Having said that, it's a much more interesting bar than I thought it would be and I don't think there is anything else quite like it available.