Kit Kat Chunky will soon be welcoming four new flavours. They don't appear to have been officially released yet, and are proving to be quite hard to find, but it is possible to find them lurking in a few local shops. The four new flavours are; Mint, Coconut, Choc Fudge and Hazelnut. I reviewed the Coconut Kit Kat Chunky a few days ago. 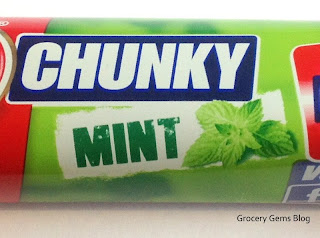 The Kit Kat Chunky Mint is described on the wrapper as "crispy wafer finger covered with mint flavour milk chocolate". So just like the Coconut version, the flavouring is all in the chocolate rather than the wafer.

There is no mistaking this for a regular Kit Kat Chunky as it has a very strong minty smell as soon as it is out of the wrapper. I'm the kind of person that likes to nibble a little bit of the thick chocolate before taking a full bite and wow this chocolate really packs a minty flavour. At first it tasted of a very sweet mint but once the chocolate flavour ebbed away there is a lingering fresh mint flavour. This means the mint flavour builds with each bite. It's not an intense flavour as such, it's too sweet for that, I would liken it to the mint flavour in a Mint Aero bar. 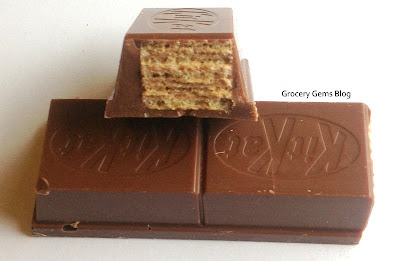 The inner wafer doesn't have any mint taste but the mintiness of the chocolate is so strong it carries through the wafer and dominates the other elements. This is quite different to the new Coconut Kit Kat Chunky which has a more subtle hint in the chocolate - leaving the wafer and chocolate with separate flavours.

My brother found this chocolate bar and brought it over while we were having a family get together. It was a good opportunity to cut the chocolate into small chunks and test it on various members of my family and friends! I've said before that I'm not a fan of mint chocolate so I was keen to get the view of a friend who loves the stuff. They rated this bar as 10 out of 10. In fact they asked if there was anymore (sadly I only had one bar!). I'm sure the Mint Kit Kat Chunky is going to be very popular amongst mint chocolate fans and I wouldn't be surprised if it won the "Choose a Chunky Champion" vote.

And... whatever you are doing tonight have a very happy and safe New Year's Eve! I'll be back with more reviews in 2013!