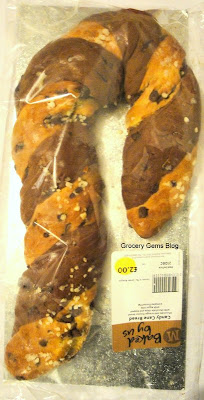 I saw this bread featured on the blog Your Star Will Shine and I couldn't wait to give it a try. Morrisons have come up with a fabulously innovative festive bread with this Candy Cane shaped loaf. Apparently it came about as a direct response to customer feedback which questioned why so many seasonal breads are fruit based. Any dried fruit phobics reading this will be glad to hear that this Candy Cane has a chocolate orange flavour and no fruit at all. 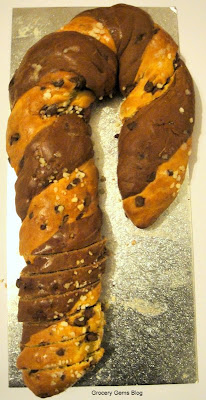 These Candy Cane breads are prepared each morning in Morrison's in-store bakeries and come displayed on a silver card base, ready to be sliced up and served. The bread consists of two separate doughs, one chocolate and one plain, which have been plaited together to create an attractive candy stripes effect. The top is sprinkled with a "sugar nibs" topping. 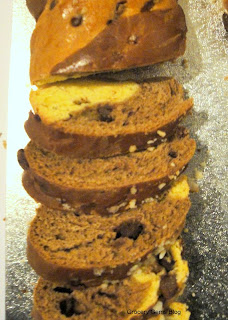 The bread had a much softer texture than I was expecting. It had the soft airy feel of a brioche loaf rather than a typical bread. Each piece has a lovely half golden, half chocolate appearance with a decent distribution of chocolate chips throughout. 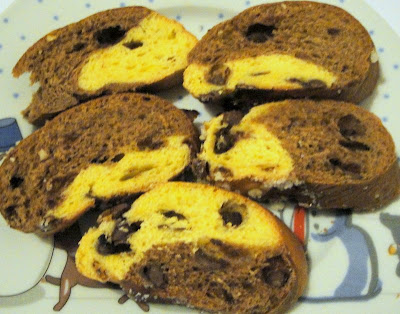 I've often said that I'm not the greatest fan of chocolate orange as a flavour combination, but it works very well in this bread. The orange is not overpowering despite being fairly strong. It works exceptionally well with the soft bread base and rich chocolate flavours, without becoming overly sweet. The chocolate chips look dark but don't taste as intense as dark chocolate, but they do provide a simple burst of sweetness. The sugar nibs on top give the bread an extra little crunch and sweetness.  The overall flavour is delicious and I have to admit it's much tastier than I thought it would be.

With some products it's possible to say that one piece is enough, but this bread is so moreish it really is hard to stop at one piece! It's a large sized loaf but somehow I wouldn't expect it to last very long at all!