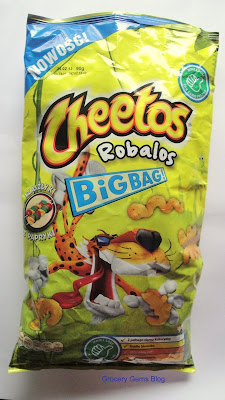 Cheetos used to be one of those brands that was not readily available in the UK, I'd only ever bought them on holiday or from US import stores. They are now much easier to find, especially in small local stores, but these are usually Polish origin Cheetos, like these Cheetos Robalos. 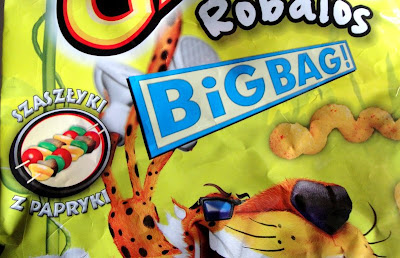 Going by the small picture of two kebabs skewers on the packaging I was pretty certain what kind of flavour the words "Szasztyki Z Papryki" described. To be on the safe side I checked with Google Translate, obviously not expecting any help whatsoever, and was given the surprisingly coherent translation as "Kebabs with Peppers". Possibly the most helpful Google Translate has ever been. I have never come across a pepper kebab flavoured snack before, it's a unique concept but one that is not too crazy. Which brings me to the shape of these crisps.

Call me mad but I'm used to Cheetos having the standard appearance of classic cheese puff snacks. Obviously a boring shape was not good enough for a whacky "Kebabs with Peppers" flavour, quite clearly such a concoction was calling out to be shaped in the form of various insects. 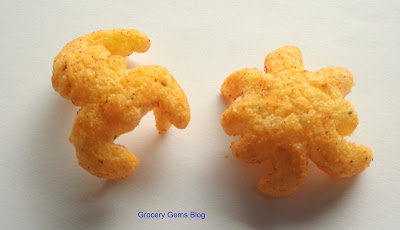 It's funny because when I saw the shape of the Cheetos Robalos on the front of the pack I thought they looked a little strange but kind of cute. I was wrong. When I opened the packet, man are these things hideous looking! On top of that I have learnt that insect shapes and crunchy textures do not mix, my brain was almost tricked into thinking I was munching on real insects, somewhat detracting from my enjoyment. I hate insects. 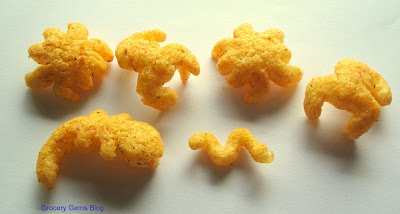 To be fair to the Cheetos Robalos, they are not all shaped like insects. Oh no, there are also what appears to be snakes and lizards... great. But back to the actual flavour "Kebabs with Peppers". I was slightly worried that Google Translate was wrong and that the correct translation should read "Insect Kebabs"; for all I know these are some strange TV tie in with the Polish version of I'm a Celebrity Get Me Out Of Here. But no fear, these taste very similar to a regular pizza flavoured crisp. They have the same tomato, onion, cheese and herb flavour combination, and yes a hint of peppers too, which is very moreish. Well, they would be moreish if only they weren't shaped like insects.

I couldn't help browsing the official Cheetos website for Poland, (well who wouldn't want to do that?) and I stumbled upon these Limited Edition (or as I like to say in my new favourite Polish words Edycja Limitowana) Rap Cheetos, with the flavours "Hip Hop Hot Dog" and "Gangsta Paprika". Awesome!

RATING*: 6 out of 10 (purely for taste not looks)
Buy them again?: Only if I'm holding some kind of bug themed party, so no.
Nutrition: 485 calories per 100g
Purchased: Local corner shop
Price: £1

* I'm just playing around with ratings at the moment, I haven't decided if I will keep this or not!