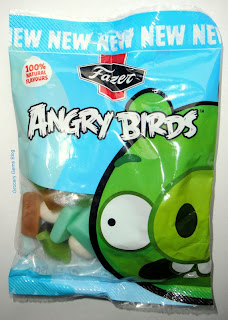 A few month ago I tried the US Angry Birds Fruit Gummies which I thought were awful beyond belief. We literally ate a few and had to throw the whole box away, they were so artificial and chemical tasting. I briefly reviewed them here. Luckily for Angry Birds fans there is a new range of gaming sweets available from European brand Fazer (which are made in Finland to be precise). 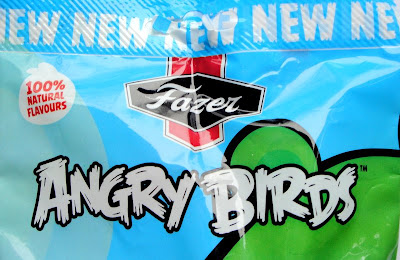 After my previous experience, I looked at these Angry Birds sweets by Fazer a little suspiciously, until I happily noticed the "100% Natural Flavours" tag on the front - sold! 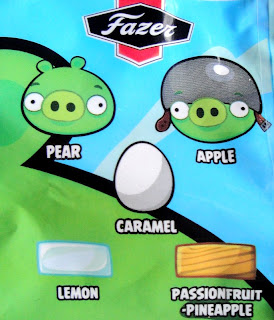 But it's not just the flavour which is a million times better, the shapes used for the actual sweets are cuter and more interesting. The bag I purchased featured pigs, various building blocks and a few eggs - all with different flavours. The sweets themselves are a bit like jelly babies in texture, they are jelly like in the middle with a slightly harder coating on the outside.

The flavours were all very good, thankfully there were no nasty flavours with these. The pigs had a pear or apple flavour and were fruity and sweet, without tasting artificial at all. The "wood" blocks were all passion fruit and pineapple flavour. The pineapple was not as flavourful as I was expecting, but they did have a pleasing vague tropical fruit flavour. The "ice" blocks had the strongest flavour of the bunch with their sweet lemon taste. 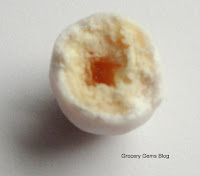 The egg shaped sweets are awesome because, once bitten into, they have a gooey centre that looks like the yolk. Fantastic stuff! They have a great caramel flavour that provides an extra sweetness amongst all the other fruity flavours. 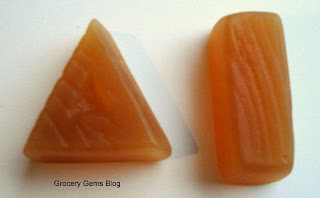 The shapes all look fab, I loved all the little attention to details, like the "wooden" blocks which had little grooves to make them look like wood. 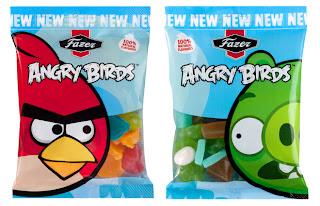 There is also a linked version of these sweets available which features sweets in the shape of the Angry Birds themselves. I haven't been able to find any of these yet which is a shame as it would be great to have both packs.

Email ThisBlogThis!Share to TwitterShare to FacebookShare to Pinterest
Labels: Around the World, Gaming, International, Sweets