The final bar in my round up of the four new Kit Kat Chunky "Choose A Chunky Champion" releases is the Hazelnut. So is it a case of saving the best for last?

The basic description of the Hazelnut bar given on the wrapping is "Crisp wafer finger with a creamed hazelnut topping (19%) covered in milk chocolate". Hazelnut and chocolate is a dream combination so I was slightly disappointed that the actual chocolate isn't hazelnut flavoured. 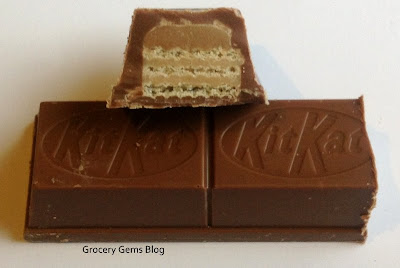 Just like the new Choc Fudge bar, the Hazelnut Kit Kat Chunky has a separate layer of flavoured filling on top of the wafer. You can clearly see the hazelnut layer in these photos above - it's a much lighter shade of brown than the outer chocolate. 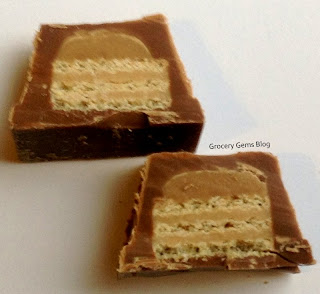 So now how to describe the taste of  "creamed hazelnut". I was expecting it to be a fairly simple Nutella type taste but strangely it's not. The nutty flavour is unmistakeably that of hazelnuts, but it has been mixed with a fudgey creamy concoction rather than chocolate. The hazelnut flavour is strong and does succeed in dominating the wafer and chocolate, but I would have preferred a chocolate hazelnut. The sugary nature of the hazelnut layer was far too sweet for me but perhaps that is just the "I've tried four Kit Kat Chunkys in as many days" talking.

As a brief digression there has also been a similar bar available in the UK for a while now, even though it is of East European origin, called the Kit Kat Chunky Hazelnut Cream. It is very similar to this new Kit Kat but the hazelnut flavour is stronger and sweeter in this new bar. I never thought I would say this but I actually preferred the subtle richness of that previous Hazelnut Cream to this.

Overall this was not the best of the bunch for me - that remains the Coconut Kit Kat Chunky. The balance of flavours was much more enjoyable and the coconut flavour was delicious. No surprise then that my vote for the Choose A Chunky Champion is definitely going to: COCONUT!

Since I'm a coconut fan anyway, I'd love to hear from any hazelnut chocolate fans out there with their opinions on the new Hazelnut bar.