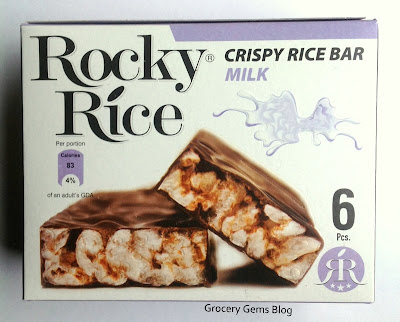 It's almost a shame that I don't have three more products named "Rocky" to review, as after yesterday's Rocky Chockas, I could have had a "Rocky" themed week! Still I have to admit that the name was at least half the reason why I bought these cereal bars (yes, I'm fickle like that) - it's not just a rice bar it's a Rocky Rice bar. Perfect name for a health snack if you ask me. The back of the box even says SIX in PACK. Rocky. Six Pack. I'm starting to get some subliminal messages here.

I bought these in Aldi for £1 for the six pack, but they are actually from Serbia, therefore giving them the prestigious honour of being the first product from Serbia that I have ever reviewed. I think. *Quick Search Of Own Blog*. Yes they are, phew.

Aldi is one of those grocery stores that often carries products for limited time only, changing with the seasons or their own instore themes. These Rocky Rice bars are sure to be a January only product, seeing as they are undoubtedly appealing to our desperate urge to shift the Christmas bulge. Each bar has only 83 calories and is not only gluten free, but is also made with brown rice. 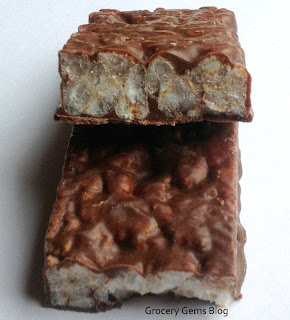 Whether you like these bars or not probably depends on your views on rice cakes in general, if you think they are best used as coasters (as reader Flipmode said back in my review of Snack a Jacks Chocolate & Coconut) then you should probably avoid the Rocky Rice. If however you are partial to the occasional rice cake then you can't really go wrong with these. They are a lot less sweet than the chocolate Snack a Jacks I have tried before, but happily they are a lot more chocolately. Even though the inner rice is quite bland, it has a good crunch to it, and melts away nicely leaving behind lots of surprisingly rich cocoa flavour. I found them pleasantly satisfying and filling and I'm sure it would cost a lot more to buy a similar product from a health food shop.

Also available in a Strawberry variety. I would definitely like to give those a try too and stock up on a few more boxes of these chocolate ones.

Email ThisBlogThis!Share to TwitterShare to FacebookShare to Pinterest
Labels: Around the World, Cereal Bars, Chocolate, Healthy