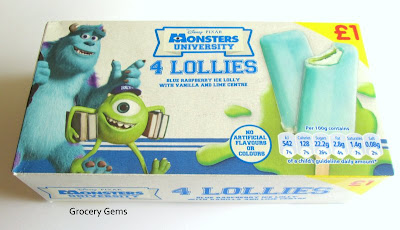 These Monsters University Ice Lollies were released last month to coincide with the UK release of the Disney Pixar film of the same name. They're made by R&R Ice Cream, owners of brands such as Fab, Skinny Cow and Kelly's of Cornwall, who have also released other Disney themed ice lollies in the past. I like the fact that the lollies, whilst fairly basic looking, are blue and green in colour - very fitting for the Monsters Inc theme. 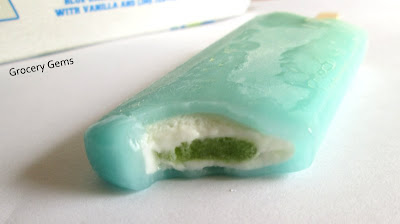 They're described on the box as blue raspberry flavour ice lollies with vanilla and lime centres. The outer blue layer is hard in texture, like an ice shell around the inner ice cream, and has a very subtle generic fruity flavour. The inner vanilla ice cream is quite fluffy and creamy, the usual kids ice lolly stuff. The contrast of the hard icy outer layer and soft vanilla inside reminded me of the classic kids Fruit Split ice lollies. Then there is an extra burst of lime flavour from the bright green core. The taste here is quite strong and sweet, a bit like undiluted squash, although it is offset by the plainer outer layers. 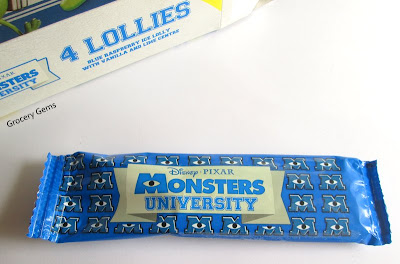 My kids however, didn't enjoy the flavour of the lime centre, which was a bit too concentrated and syrupy for them. I still think they're good value at £1.00 for 4 lollies and they're worth a try if your kids are Monsters Inc fans. I've happily eaten one or two (I'm obviously a lot less fussy then my kids!) and I find them nicely refreshing. Each lolly has only 58 calories and is free of artificial colours, flavours and preservatives.