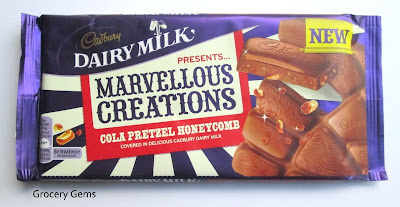 Something seriously strange is going on at Cadbury HQ. I'm thinking their water supply has been tampered with or perhaps they've been taken over by a mad scientist. It started out innocently enough with Cadbury plundering the Milka back catalogue to bring us such delights as the Dairy Milk with Oreo bar. Things rapidly progressed as the new releases kept coming, until finally the end seemed to be in sight when Marvellous Creations presented us with a Jelly Popping Candy Shells chocolate bar. Surely the madness had reached it's peak? I've now realised that this was all merely a distraction before Cadbury unleashed the apparent abomination that is a Cola, Pretzel, & Honeycomb themed chocolate bar upon us all! 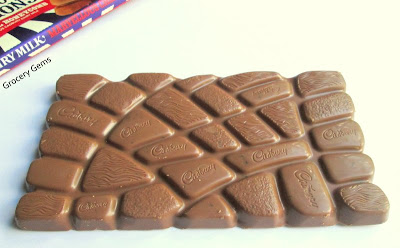 My husband has a theory that wackily themed bars such as this one are nothing more than a Victor Frankenstein inspired recycling of whatever confectionary is available, joined together to create a new monstrosity. He may be right since at least two of the ingredients in this bar (honeycomb pieces and pretzels) already exist in some of Cadbury's products. Two ingredients sorted! But surely they now need something new and different to give the old parts a new lease of life... 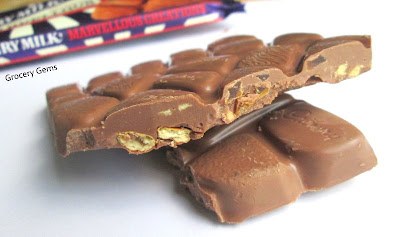 Cola Flavour Nuggets! These are small bits of jelly cola sweets (basically cola bottles) which have been scattered throughout the bar, making up 8% of the ingredients, along with the 4% salted pretzel pieces and 3% honeycomb bits. The last time I tried cola and chocolate together in a snack, in the form of the Rocky Fizzy Cola bar, the result was completely vile and inedible. The flavour in this Cadbury version is, thankfully, completely different. The cola is quite sweet, with a subtle tangy edge, and actually suits the creamy Dairy Milk chocolate well.

The salty pretzel pieces and toffee sweet honeycomb add an extra flavour and crunchy texture to the bar, which means the cola nuggets don't dominate the overall flavour. The result is slightly strange but surprisingly enjoyable. There are enough normal components within the chocolate to keep this from being too unusual tasting. After all, it has the three basic food groups that are needed to sustain life; sugar, salt and cola.