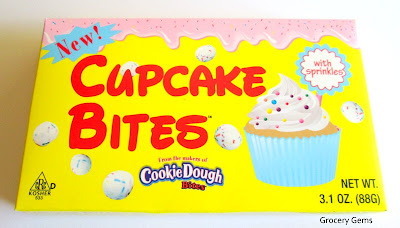 Cookie Dough Bites are an American product that claims to be a cookie dough inspired candy. It's a clever idea to try to recreate the deliciousness that is raw cookie dough in the format of a sweetie. This Cupcake Bites version has been out for a few years now in the US and was very kindly sent to me by the snack maestro @Banjo_Chocolate. 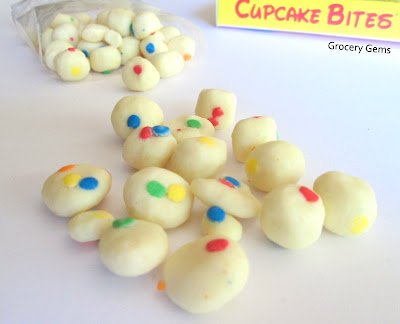 The actual Cupcake Bites are not really as pretty as the box suggests by the With Sprinkles tagline. The balls are quite chalky looking and irregularly shaped, whilst the so called sprinkles reminded me of the play-doh creations my children came up with when they were toddlers. "Look Mummy my play-doh man has green and yellow eyeballs!" 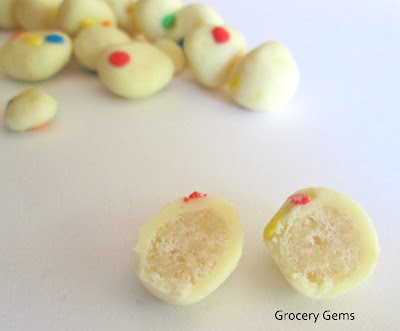 Each Cupcake Bite has a outer layer of what is optimistically called white frosting on the back of the box (and rather bizarrely called White Kreemy Coating in the ingredients), and an inner layer of cupcake flavoured cookie dough. Both the inner and outer layers taste almost identical and can be summed up in one word - SUGARY. In fact, they even have a slightly gritty texture just to emphasize the sugar. There's not much other flavour to these, except for a slight cake mix type taste and a vague hint of vanilla. Having said all that, I have to admit I found these strangely moreish. Even though I should be scoring them only 1 out of 10, I found myself guiltily enjoying these little cupcake morsels!

Thank you again to @Banjo_Chocolate, for sending me these Cupcake Bites. Do you remember the Banjo chocolate bar? Please check out the Bring Back Banjo Chocolate Bar Facebook page and sign the petition here to get Mars to bring the Banjo back in production!

RATING: 5 out of 10.
Buy them again?: I'd like to try the Red Velvet Bites too.
Nutrition: Egg free.
Purchased: Available at most import candy specialists such as CyberCandy.
Price: £1.99.
Posted by Grocery Gems at 12:18