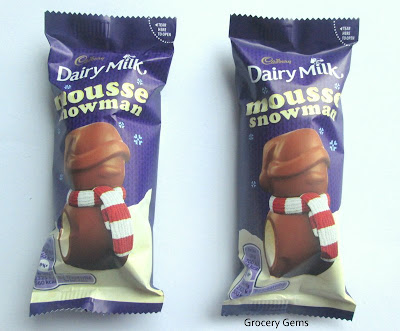 If you've been to a supermarket in the last few weeks then you've probably noticed the start of the inevitable Christmas landslide of products being piled up, mainly in the form of large tins of chocolates. It's a shame that Autumn seems to be skipped altogether with this influx, but even I couldn't resist the lure of the Cadbury Dairy Milk Mousse Snowman. 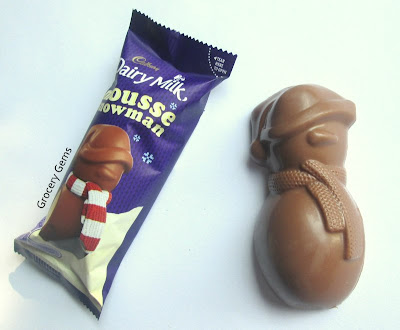 The chocolate itself doesn't look like a traditional snowman, especially given the lack of facial features. The Santa hat on top is a bit slouchy and looks a bit like a flat cap! The detail on the scarf is very good though, a feature that links into the theme for the rest of the Cadbury Christmas range for 2013. Apparently, Cadbury will be "putting on it's Christmas jumper" by introducing a "knitted" look to it's packaging over the festive period. 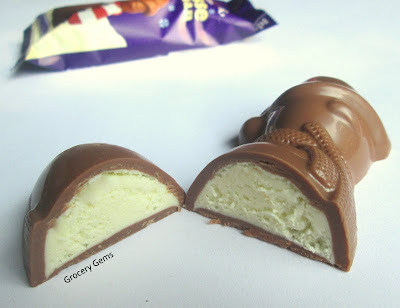 At first I thought the Snowman filling was going to be an aerated one, like those in the Dairy Milk Bubbly range. However, this "soft vanilla flavour mousse" seems very similar to the "fluffy milky mousse centre" that filled the vanilla Cadbury Egg 'n' Spoon. The Snowman's mousse centre is very soft and fluffy with a deliciously creamy white chocolate, rather than just vanilla, flavour, enveloped in a classic Dairy Milk chocolate. It may not be the most exciting combination for Christmas, but it's certainly a very tasty one. Overall, it's a good product, but I can't help thinking that Cadbury missed a trick by not making these Snowmen white chocolate on the outside!


I will have to go back to Co-Op to get a photo of the stand that these were on, it was a full-on Christmas display. Does anyone out there (apart from review bloggers of course!) really buy Christmas products so early? I'd love to know your thoughts on this!