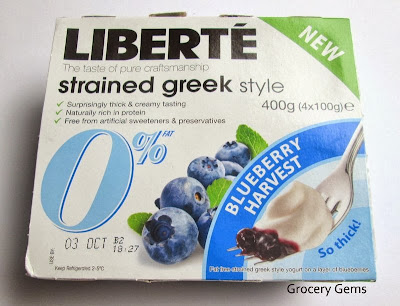 As an all round yogurt fan, I've tried out a few different brands of the newly popular super thick strained yogurts, such as Fruyo (review here) and Danio (review here). Even though I enjoyed the super thick texture of these types of yogurts, I don't buy them too often as I find that the individual servings a bit too large (170g in the Fruyo pots) for me. I've been meaning to try these Liberté Strained yogurts, because the pots are much smaller (100g), which I prefer. The Liberté brand has a long heritage in Canada where it began, and has finally been launched in the UK this year. 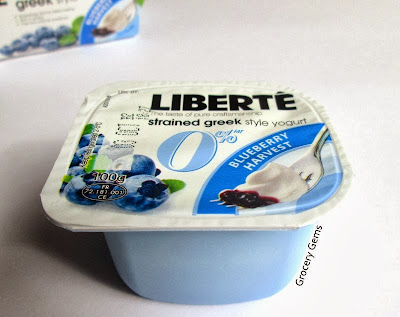 There are several flavours available; Strawberry, Blueberry Harvest, Lemon Bliss, Golden Honey, as well as a plain variety. I decided to go for the Blueberry Harvest. Each pot has 85 calories, is naturally rich in protein and is free from artificial sweeteners and preservatives. 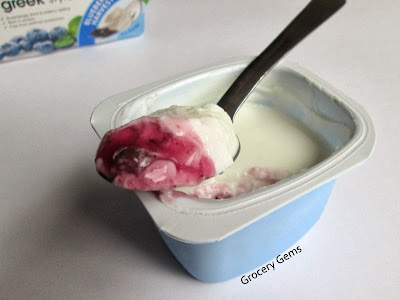 I had seen in other reviews of the Liberté range that the yogurt is often separated (with a watery layer on top), however I didn't encounter that problem with any of mine. The yogurt was thick, creamy and extremely satisfying, just like the other strained yogurts I've tried. I found that the blueberry compote layer at the bottom had plenty of juicy blueberries, but was quite runny, almost liquid in consistency. Despite that, I still enjoyed this fruity layer, as I found it lighter and less sugary than the compotes in other yogurt brands. and it worked well with the thick texture of the yogurt itself.

Email ThisBlogThis!Share to TwitterShare to FacebookShare to Pinterest
Labels: Yogurt