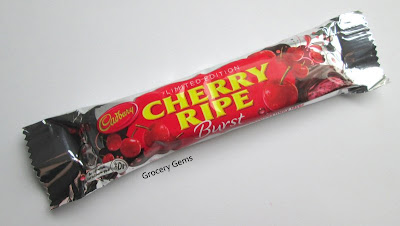 I picked up this Limited Edition Cherry Ripe Burst from the CyberCandy stall at HyperJapan last weekend. I've always wanted to try the Cherry Ripe bar, not just because of it's a cherry and coconut filling, but mainly to figure out why this has been Australia's most popular chocolate bar for years. 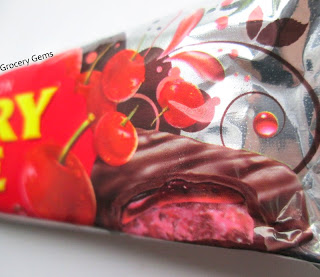 A standard Cadbury Cherry Ripe bar consists of a cherry flavoured coconut filling wrapped in dark chocolate. The Limited Edition Cherry Ripe Burst is quite similar but has the bonus of an extra cherry layer. 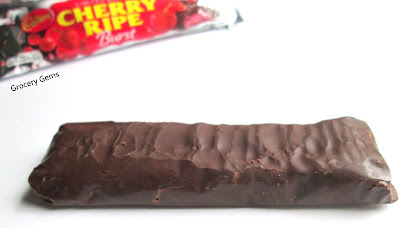 It's a slightly weird fact that even though I love coconut I really don't like Bounty chocolate bars at all. This is mainly due to the sugary nature and soggy texture of the Bounty filling, It just doesn't do anything for me at all. I much prefer coconut when it's used just as a flavour. The only reason that I mention that is because, even though the Cherry Ripe Burst has a very similar filling to a Bounty, it's an infinitely more enjoyable chocolate bar. 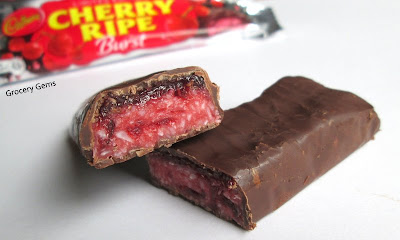 The cherry and coconut combination here is sweet and delicious. The extra jam-like cherry layer not only gives an extra burst of fruity flavour, which is very welcome, it also helps to curb the dreaded Bounty like texture. Meanwhile, the outer dark chocolate coating, whilst being quite thin, complements the coconut and cherry flavours perfectly with it's sweetly dark flavour.

It's certainly a lovely tasting bar to eat in the summer. I had kept mine in the fridge (not something I usually do with chocolate) and it was absolutely delicious when eaten slightly cold. The whole thing is about a million times nicer than I thought it would be when faced with the description, and I can understand now why it's been such a popular bar in Australia. It's definitely a bar I would want to buy again in the future.

Email ThisBlogThis!Share to TwitterShare to FacebookShare to Pinterest
Labels: Around the World, Cadbury, Cherry, Chocolate, Coconut