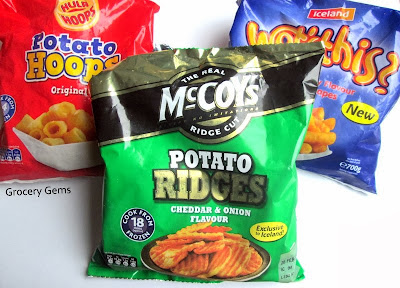 I was quite surprised when I spotted these in the freezer section - at first glance they may look like normal crisp packets but they're actually large bags of frozen potato oven food! They are exclusive to Iceland and feature the official logo of McCoys and Hula Hoops. There is also an unofficial dupe that you can see lurking in the back of the above photo, but more about that later! 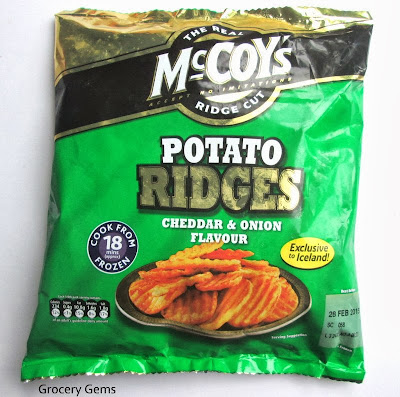 First up there are the McCoy's Potato Ridges. These were available in two flavours Cheddar & Onion or Salted. They consist of variously sized discs of ridged potato which need 18 minutes in the oven to cook. The result was very tasty with just the right amount of authentic cheddar flavour and a hint of onion. These were so good when straight out of the oven! 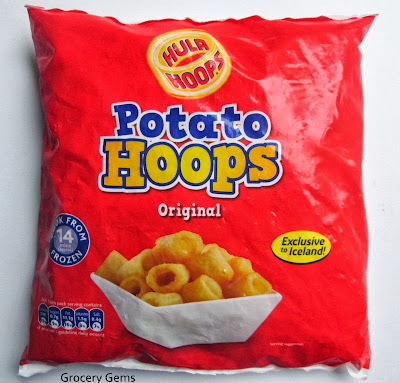 Next up is the Hula Hoops Potato Hoops. These were available in three flavours; Original, BBQ Beef, or Cheese & Onion. I decided to go for the Original flavour with these. They look really impressive, just like large Hula Hoops, and only take 14 minutes in the oven to cook. The flavour was not that different from a real Hula Hoop crisp especially once they had started cool down. It's worth keeping an eye on the oven and making sure these don't overcook as they get overly crunchy very easily. 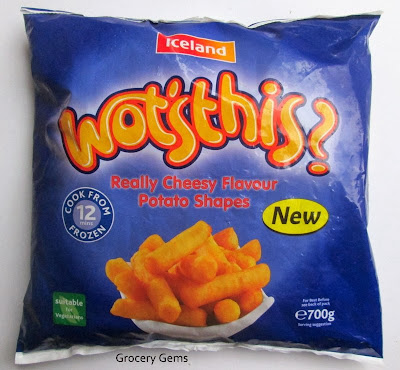 Lastly are these Wot's this? Good question Iceland. Unlike the previous two delights this didn't have any official logo or trademark info on the back, so they're clearly a copy of a famous brand. Unfortunately, they were also the only ones that were not tasty at all. The cheesy flavour here is very artificial and quite overpowering. The texture however was nice, the inside is a bit like a potato croquette, with a soft mashed potato type filling. 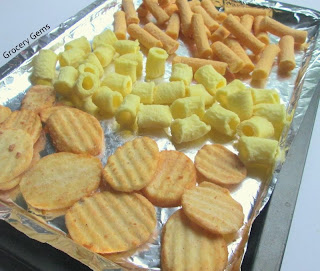 Before they went in the oven; McCoy's Cheddar & Onion, Hula Hoops in the middle and Wot'sthis? at the top. 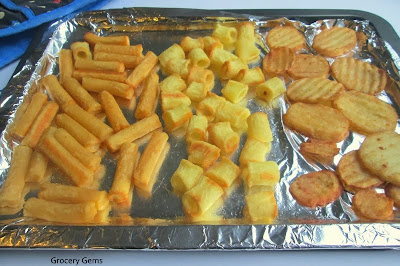 And after! Overall, these are definitely a fun and innovative idea, and one that I have never seen or heard of before*. Do other countries have oven products based on popular crisp brands? I'd love to know if the UK is the first!

*Thank you to the Lindsey and other commentators below who remember Hula Hoops and Wotsits frozen products existing in the past! If anyone else remembers these, please do add to the comments below :)