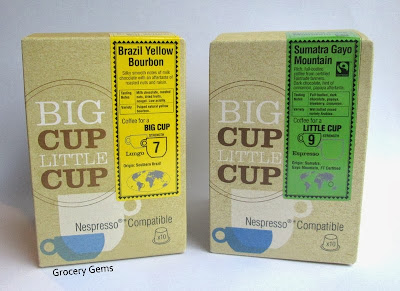 It's always a daunting task choosing a new kitchen appliance, but I can easily say that my Nespresso coffee machine has been one of the best purchases I've ever made. The only downside to it, unlike most other coffee pod machines, has been the lack of alternatives to the capsules. However, that situation has come to an end with the expiration of Nespresso's 20 year patent on their capsule technology. Launched in September, Big Cup Little Cup, are now providing a full range of quality coffees from powerful espressos to luxurious lattes - all compatible with the Nespresso - and I was very happy to be given the opportunity to review them. 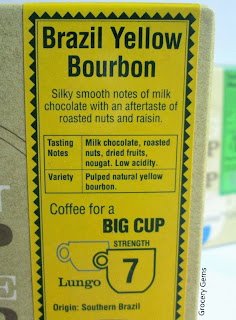 I was sent two boxes of coffee capsules to try; the Brazil Yellow Bourbon, a 7 strength Lungo, and also the Sumatra Gayo Mountain, a 9 strength Espresso - giving me the chance to try both a big cup and a little cup! The Brazil Yellow Bourbon is described as being perfect for milky Americanos and cappuccinos due to it's creamy medium dark roast and hints of chocolate and nougat. 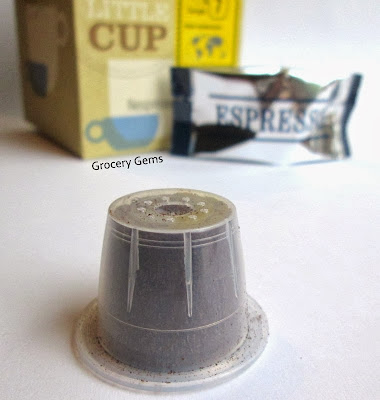 I made mine on the Lungo setting and added some extra hot water and hot milk to make an Americano style coffee. The coffee had a good amount of crema on top, although less than a Nespresso brand capsule, and immediately had an inviting scent. The flavour itself was well rounded, extremely smooth, and with prominent sweet notes that created a very satisfying coffee. 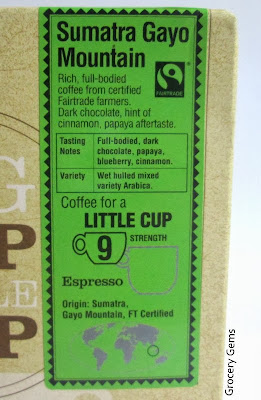 The Sumatra Gayo Mountain is blended for little cups, and is especially perfect for an espresso, but can also be used for milkier coffees. It's a 9 strength blend, and is described as having hints of dark chocolate, cinnamon and papaya. 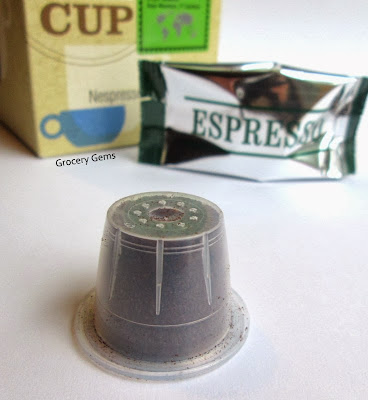 This time I used the capsule to make a small espresso, which is not usually how I take my coffee, but I wanted to try it "little cup" style! I expected to try it and then need to add some milk, but surprisingly, I found it so silky and easy to drink that no milk was necessary. For a 9 strength coffee, there is no bitter taste at all here, and it's actually quite light. In fact it has a natural sweetness which makes it extremely pleasant and gratifying as an espresso.

Overall I was impressed by these new coffees, they're quite different in flavour to the Nespresso own brand capsules, and it's always great to have more choice available. The Big Cup Little Cup capsules are up to 35% cheaper than Nespresso, although you have to spend £50 for free delivery. It's also interesting to note that the Big Cup Little Cup capsules are made of plastic rather than aluminium, and are foil wrapped for freshness, making them much easier to recycle. I've tried these coffees for about a week now and I haven't had any problems with their compatibility with the Nespresso machine, they are used in exactly the same way and worked perfectly every time.

Don't forget you can use the discount code KATHERINE0910 to get 15% off your order!

This product was very kindly sent to me for review but all opinions are my own. I don't receive any compensation if you order from Big Cup Little Cup or use the above code.