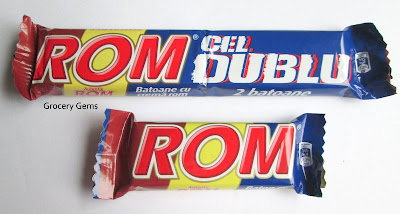 This review has been sitting in my draft folder for quite a while now! I first saw the ROM bar on the Choc It Out youtube video 10 Foreign Chocolate Bars, which highlights some very unusual chocolates that can be purchased in the UK. It seemed a very fitting inclusion for my Around the World challenge, especially as the wrapper depicts the colours of the Romanian national flag. 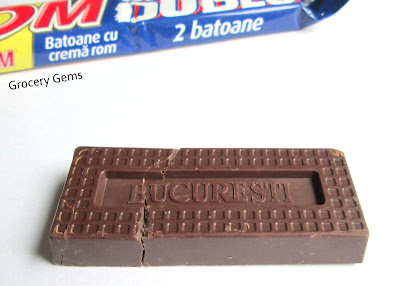 The patriotic appearance of the ROM continues onto the chocolate itself, with the words "Bucuresti" imprinted on the bar for Romania's capital city Bucharest. In fact there is a reason behind all this patriotic imagery beyond mere asthetics. When the ROM was released in 1964 it was the only choice of chocolate bar available under the old communist regime. I'm sure this must be the first chocolate bar I've blogged about that has political roots. Even though times have changed in Romania, it apparently caused quite a stir when the wrapper's iconic Romanian patriotic look was briefly replaced with the American flag instead! 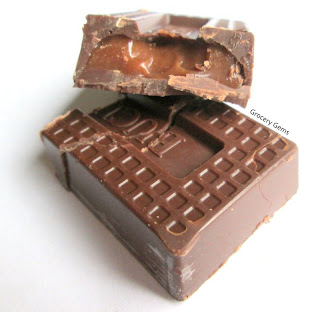 Onto the bar itself. The outer chocolate is quite dark and is filled with a creamy caramel and rum flavoured filling. It's all very sweet and the alcohol flavour is quite strong, certainly too strong for me. The flavour is not to my liking at all and sadly I couldn't finish the bar. This is simply due to the fact that I don't like alcohol and chocolate combinations in general and not a reflection of the ROM itself. Therefore, I don't feel I can pass judgement on the overall flavour. I can however say that the ROM is probably worth a try just for the history alone!

Purchased: Local Romanian grocery store (thanks to Marcus ChocItOut for pointing me in the right direction!).
Price: Can't quite remember but they were very cheap, less than £0.50p.

Email ThisBlogThis!Share to TwitterShare to FacebookShare to Pinterest
Labels: Around the World, Chocolate