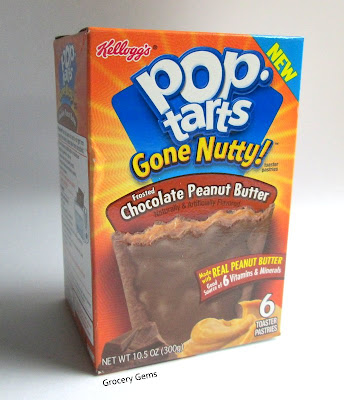 I bought these new Gone Nutty! Chocolate Peanut Butter Pop Tarts to be part of a foodie parcel I did for my hubby on Father's Day last week. They're quite hard to track down but absolutely worth it for any Pop Tart fan. There are two varieties in this Gone Nutty! range; a frosted version called Chocolate Peanut Butter, and also the slightly healthier (or perhaps that should read slightly less unhealthy) unfrosted Peanut Butter (reviewed here by The Impulsive Buy). Obviously I went for the frosted chocolate version! 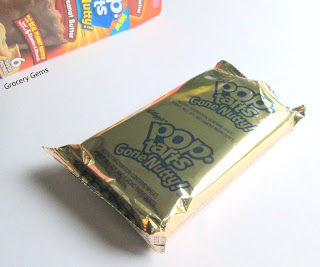 I have to quickly mention the packaging for these Pop Tarts because it's clear that Kellogg's have made an extra effort with this range. The outer box is much glossier than usual with added embossing of the pictures and logo. The Pop Tarts are then wrapped in shiny gold packets rather than the usual silver, emphasising the treasure like nature of the contents! 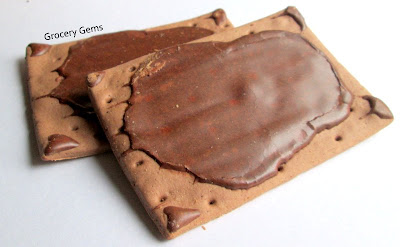 For some reason the actual pastries don't have the same high level of finish as the packaging. The frosting in particular looks like the Trainee Pop Tart Frosters were given their first try at frosting, and no one had the heart to tell them that their efforts were completely dire. Either that or the frosting machine is broken. 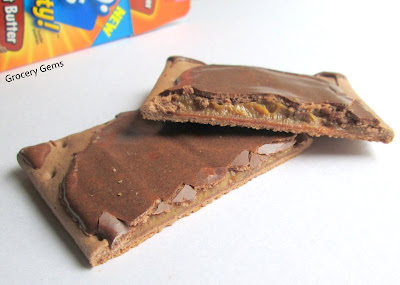 Still, it's always the insides that count, and that is certainly the case with these Pop Tarts. Once heated up in the toaster these are truly little parcels of melty gooey peanut butter heaven. The peanut butter is extremely sweet and salty in the way that only America peanut butter can be. The chocolate frosting might as well be pure sugar for all the chocolate flavour it adds, but it still tastes delicious combined with the plainer pastry. The whole product is a complete sugar rush but an extremely enjoyable one. It's what I imagine a heated up Reese's Peanut Butter Cup would taste like - but even more satisfying!

The only negatives are that these are almost impossible to find (basically Ebay is the only option in the UK at the moment), and there are only 6 pastries in the box instead of the usual 8. No prizes for guessing how many days this box of 6 lasted amongst my family of 4. I hope it's not too long before Kellogg's realise how incredibly popular these are and instigate a wider release.