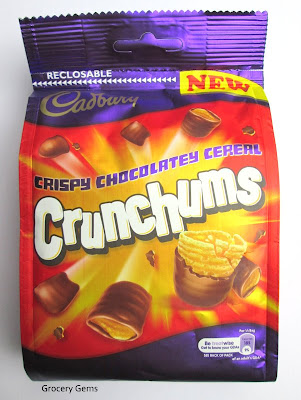 Crunchems are another new addition to the already extensive Cadbury "sharing bag" range. Their previous new offerings, the Cadbury Choc Full Of Pretzels and Popcorn (see reviews here and here) were both fairly good, although I've never bought them again after my initial reviews. I was hoping for something a bit more special from these "Crispy Chocolately Cereal" Crunchums. 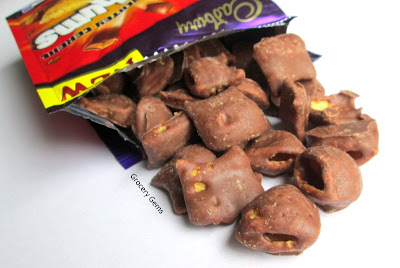 The appearance of these Crunchums is quite odd, some of them look like they have gaping open "mouths" which is slighlty unsettling. 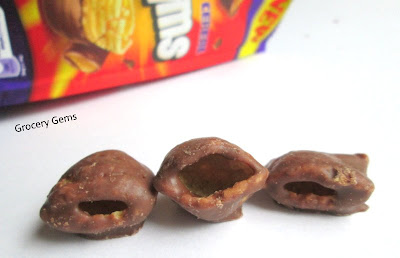 See? Luckily for the Crunchums this is not a beauty contest! So what exactly is a Crunchum anyway? Quite frankly I'm none the wiser by looking at them. They're described simply on the back, as "crunchy cereal bites tumbled in delicious Cadbury Milk Chocolate", and also as "milk chocolate covered maize snacks". 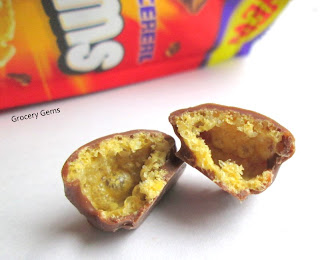 They actually look much nicer on the inside - it really is the insides that count with these Crunchums, and that pretty much goes for the taste too. The outer chocolate is not exactly like a Dairy Milk chocolate, it's darker, glossier and slightly waxy. It's perfectly fine for it's duties here, provides a creamy sweetness and subtle cocoa hit. I didn't know what to expect from the innards with it's "cereal bites" definition, since that could mean almost anything. It turns out the inner cereal is very much a savoury and salty one. More similar to a savoury puffed corn crisp rather than a breakfast type cereal. I have to admit it's a very nice combination especially for a sweet and salty fanatic such as myself. It gives that sensation of eating ready salted crisps with some chocolate - something you'll either love or hate.


Finally a sharing bag from Cadbury that I can imagine buying again! I'd also love to track down the Milka Snax Cranchitos which appear to be an almost identical product.