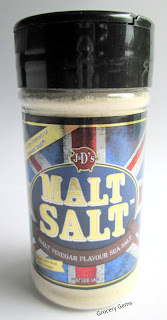 My local Tesco now has an American section in the World Foods aisle - finally! Hiding amongst the usual imports from the US of brightly coloured cereals, Pop Tarts and chocolate bars, were these small jars of J&D's Malt Salt. It's described as a "malt vinegar flavour sea salt" which will give chips all the tang and kick of malt vinegar without the soggy texture - "let's keep it crispy people". Sold! 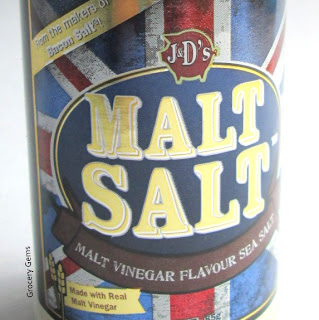 Straight away there is a strong malt vinegar scent coming from the bottle - even before opening. Once I had taken a closer look I was surprised by the texture of the Malt Salt. It's a very fine powder rather than the table salt texture I was expecting. In the interests of this review I tried a little dab of the Malt Salt without any food just to test the saltiness. It tasted great, very salty and with a real vinegar kick to it. However, once on the actual chips it seemed to lose some of it's intensity. It gave the chips quite a light vinegar flavour and not much salt at all. I still think it's a fantastic product, but it didn't flavour the chips as much as good old salt and vinegar does!

The J&D's Malt Salt is made with all natural ingredients, including malt vinegar powder. Apparently it's great for making homemade salt and vinegar popcorn.

Email ThisBlogThis!Share to TwitterShare to FacebookShare to Pinterest
Labels: American