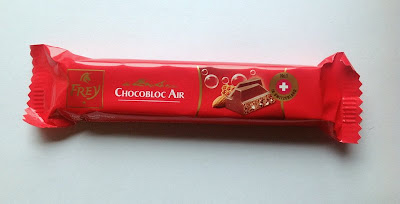 One of the great things about reading blogs is finding out about brands that otherwise would not enter my periphery. For example I wouldn't even be aware of the existence of Frey Chocolates were it not for The Snack Review's posts on the subject. The fact that Frey are the number one chocolate brand in Switzerland is kind of mind blowing considering the other chocolate makers at work in that country. Yet it remains a largely unheard of company in the UK. The Chocobloc Milk, looked especially interesting to me, it is reminiscent of a Toblerone with it's triangular and geometric design. 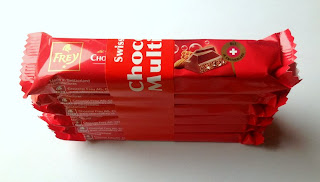 Although I had heard that Frey chocolate can sometimes be found in discount stores, I was still surprised to find this six pack of  Frey Chocobloc Air in a 99p Store. All six bars were taped together with a red band saying "Swiss Chocobloc Multipack". 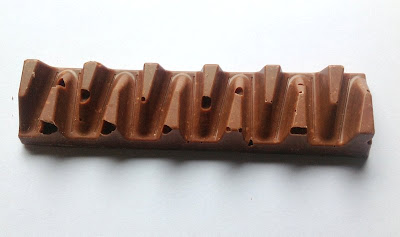 Out of the packaging it looks very similar to the other Chocobloc bars I have seen, in terms of the triangular shaping. There is however one major difference - it's full of quite large holes, especially along the edges of the chocolate segments. It gives it quite an odd look, almost as if it is slightly unfinished or didn't quite sit in the chocolate mould for long enough. I suspected I might have a flawed chocolate bar bit after opening a few they all have the same holes so it seems an intentional design by Frey. I can kind of see why it would be designed this way, this is an aerated bar after all, so the voids emphasise the airy nature of the chocolate within. 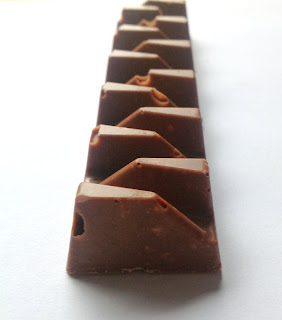 It's still quite an impressive chocolate to look at, I do love the design of the chocolate pieces. It's a bit of a shame that the holey bits detract from the overall sleek look. It's hard to convey a sense of scale in photos but this bar is actually quite small and light. It weighs only 27g which is really diddy in comparison to something like the Wispa which weighs 39g. 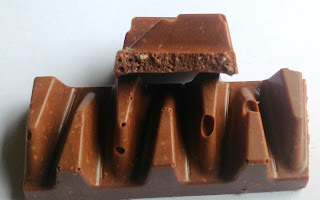 The wrapper of the chocolate shows an almond, a honeycomb and... bubbles. It's a lovely image which conveys the inner workings of this bar. There are no almond pieces as such, just lots of little pieces of nougat, which are very tiny. They are too small to add to much chewiness to the bar, like you get with Toblerone. Instead the bar retains it's lightness despite the inclusion of nougat. The nougat pieces, despite being small, do provide a subtle honey flavour which has caramelised and nutty undertones. 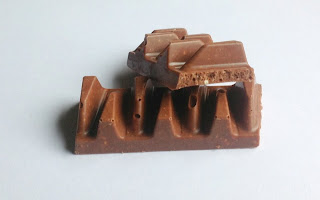 The chocolate flavour is good too. It has that unmistakably Swiss quality to it, very sweet and creamy with a slight nuttiness. The whole chocolate is full of tiny holes which give it an extremely light flavour and consistency. It really does have a velvety melt in the mouth quality. I love aerated chocolate like Wispa so this is a feature that appeals to me anyway. The overall flavour is very similar to a Toblerone but whereas Toblerone's are extremely dense and heavy, the Chocobloc Air is light and airy.

Overall I'm very impressed by the Frey Chocobloc Air. It has a minimum of 34% cocoa solids, compared to the measly 25% in a Cadbury's Wispa. If you see these in a discount store then snap them up!

Email ThisBlogThis!Share to TwitterShare to FacebookShare to Pinterest
Labels: Around the World, Chocolate, Frey, International