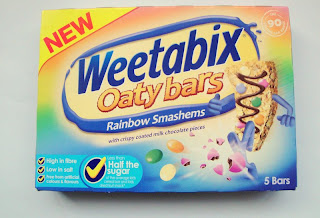 Today I'm featuring yet another new cereal bar, this time aimed at children. I really couldn't resist these new Rainbow Smashems Oaty Bars by Weetabix, they had me at the word Rainbow. Without a doubt my favourite type of weather phenomenon. I bought this box of five cereal bars in Tesco for £1.29. 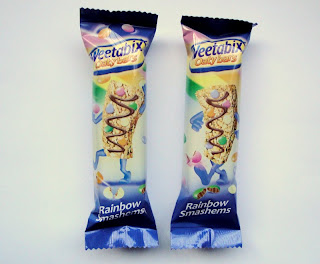 My kids were extremely excited when they saw these cereal bars, you could probably hear their squeals of delight from the moon. It's a rainbow and cereal bar mash up! I didn't tell them that these Rainbow Smashems are basically the regular chocolate Oaty Bars but with colourful Smarties, I mean "crispy coated milk chocolate pieces".

Each bar seems to have a completely random scattering of the colourful beans. We had one bar with mostly green coloured beans but no blue and another with blue but no green. I only mention this in case you have the type of kids who will wail "but I wanted blue Smarties chocolate pieces".  I'm sure most kids will eat them up too quickly to notice. I had suspected that the name "Rainbow Smashems" was some clever marketing talk for "most of your chocolate beans in this product will be smashed into small pieces". However only a few of them were actually crushed and those were all along the edges, which is understandable. 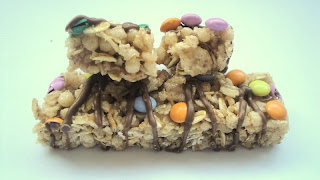 The Weetabix Oaty Bar itself is quite a simple cereal bar in terms of taste. It's a basic mix of oats and crispy rice with a little drizzle of chocolate on top. They have quite a soft and chewy texture and are quite sweet. They chocolate pieces taste good, but they are quite small so they taste mainly of the sugary coating rather than chocolate. Despite this these Oaty Bars are marketed as having half the sugar of the average children's cereal bar which is a great bonus. They are also low in salt which makes the overall flavour much more suitable for children's palates then for adults.

Overall, these Rainbow Smashems have a fantastic look and great packaging and I'm sure they will be a big hit with children. My kids are already big fans of Weetabix Oaty Bars and they love this new addition to the range.

And just for fun here are some of my favourite internet rainbow happenings:

The rainbowiest blog of all time: Rainbow Geeks