I keep seeing these Lindt bars everywhere at the moment. I know they are quite old bars and anyone interested in chocolate has probably tried them already but I was quite excited to give them a try. Lindt is more readily known for it's larger style chocolate bars so it's interesting to see them available as individual bars. Originally produced in Italy, the Nocciolatte has an absolutely stunning look when out of the packaging. It's almost a work of art.

The base of the chocolate is an extremely smooth rectangle on top of which are the most perfect hazelnut shaped pieces. It's one of the best looking chocolate bars I've seen of this size. 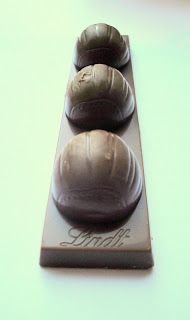 The premise of chocolate and hazelnut is also a dream combination for me and I was not let down with the taste. Inside each of the hazelnut shaped pieces is a truffle like chocolate with a whole hazelnut at it's centre. Apologies for the rather poor photo below but unfortunately the chocolate did not hang around for long enough for any more decent photos!

The chocolate has the fantastic flavour we would expect from Lindt. It is a gorgeously creamy and full flavoured milk chocolate. The centre has a smooth finish and a subtle hazelnut flavour but the actual hazelnut is quite soft so it unfortunately doesn't provide a satisfying crunchy nutty texture.

Also available in  the same individual size is the Lindt Wafer. Despite not being as elaborately named as it's Italian cousin, the Nocciolatte, this Austrian produced bar has the same sleek blue and gold packaging. The chocolate bar inside the packaging has a much plainer appearance to match it's simpler name. 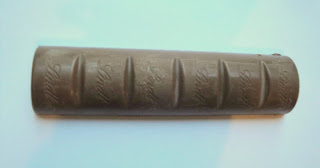 The bar is fairly drab looking but maybe I'm just unkindly comparing it to the Nocciolatte which is stunning! 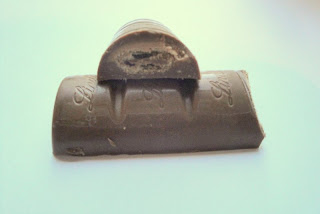 The inside does not have discernible layers of wafer as illustrated by the picture on the packaging. In fact it's hard to detect that there is any wafer at all from looking at it. However it does have a great taste overall. It provides a lovely intense milk chocolate flavour. The wafer is a little disappointing, as it doesn't have much of a crispy texture but I'm not a hugest fan of wafer anyway.

I'm not sure if I would buy these again but they were certainly worth a one-off try. The Nocciolatte is available from Waitrose but you can also find these bars in local convenience stores.