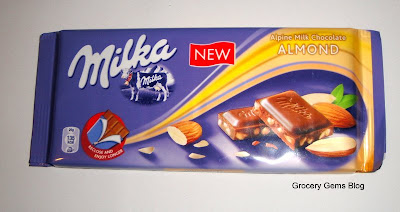 Kraft Foods in Bulgaria have been busy releasing lots of new bars under the Milka brand. I bought this from a local East European grocery store which I recently discovered. I was also excited to discover a range of Milka Jaffa cakes called Chocojaffa... review coming soon!

The look of this Milka Almond certainly matches the usual range of 100g Milka bars we get here in the UK. I'm no expert on Milka chocolate but at first glance it looked like it would live up to the bars I have tried before. Unfortunately this was not the case. 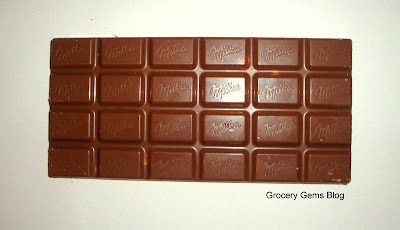 I'm not sure if Milka in Bulgaria uses a different type of chocolate but it definitely did not taste the same. Instead of the creamy and slightly nutty chocolate that I have come to expect from Milka there was an overly sugary and cloying chocolate. It had a decent enough cocoa flavour but it was so sweet that it left an almost burning sensation at the back of the throat. 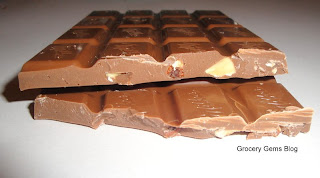 The almonds were also disappointing, there were so few of them that most segments of the chocolate had no almondwhatsoever. Not good enough for a chocolate called "Milka Almond". The almonds that I could find did have a nice crunch to them, they were not soft or bland, but at the same time the pieces were so small that not much almond flavour could be experienced.

I bought this Milka Almond bar for £1 which is a great price for an imported chocolate, but I still won't be buying it again. Having said that I know it won't stop me from trying other products from the Bulgarian Milka range so watch this space!

Have you tried this Milka Almond bar before? Let me know if you agreed with my review!