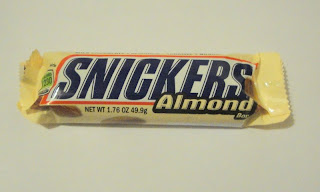 The Snickers Almond is an American chocolate bar which I assumed would be identical to a regular Snickers but just with almonds instead of peanuts. The combination of nougat, caramel, almonds and chocolate is basically the same except for the nuts. Even though I've mentioned before that Snickers is not really my thing, (there is definitely a gender divide in my house when it comes to chocolate and Snickers falls firmly into the male camp), I do love almonds so I was interested to see how this Snickers Almond would taste. 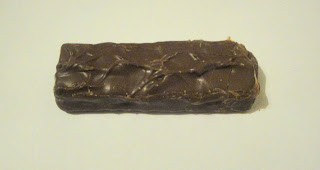 The chocolate looked quite good, with the same thick layer of chocolate as a regular Snickers. Inside it has large pieces of almond and a very smooth looking nougat. However the overall taste was very disappointing. In fact, even though I cut this bar up into smaller chunks and shared it out with my family, we still didn't manage to finish it. No one was impressed with the flavour. 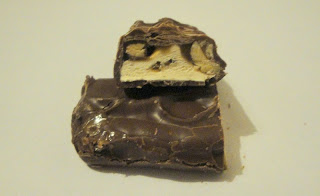 The chocolate is fine, very sweet and basic. It's the insides where the bar goes downhill. The nougat is very bland and tasteless, it's just an overly sugary mass. Nougat often has a malty or nutty flavour to it, but here it is devoid of any flavour. The almonds, although quite large, were just tasteless blobs too. There was no nice crunch from the nuts, they were too soft in texture. The caramel layer is slightly better as it has a nice salty edge to it, but it can't rescue the overall tasteless flavour of the rest of this bar.

On the plus side the whole bar is 230 calories which is not too bad for a chocolate this size (49.9g). It does have a much "lighter" taste than the regular peanut based Snickers but unfortunately it's far inferior in terms of taste.

If you have tried a Snickers Almond before? Let me know what you thought of it by leaving a comment :)