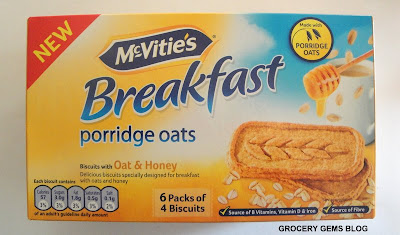 It seems that breakfast biscuits are the new cereal bar. Some of the big cereal manufactures, notably Kellogg’s Nutri-Grain and Kraft’s Belvita have already released popular breakfast biscuits. Now it's the turn of a biscuit maker to get in on the action. McVities are probably best known for their digestive biscuits but have now released a new range of biscuits simply called "Breakfast". There are three varieties to choose from; Oat & Honey, Apple, Sultana & Cinnamon, and Red Berries. 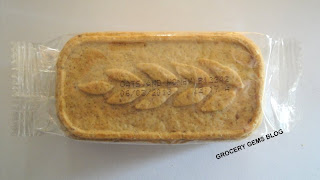 I decided on the Oat & Honey variety as a safe choice that everyone in my family could enjoy. Inside the box there are six individually sealed packs each containing four biscuits.

The biscuits have a rectangular shape with curved edges and are slightly larger than the Belvita breakfast biscuits. These biscuits are quite robust but not too hard. The texture is smooth, even though it is an oat biscuit it doesn't have too many "bits" in it. I was half expecting these to taste like a digestive, it must be the effect of the name "McVities" on me, but they don't at all. They are very much a breakfast biscuit, lots of cereals packed into a dense biscuit. Great for if you are enjoying these with a hot drink. 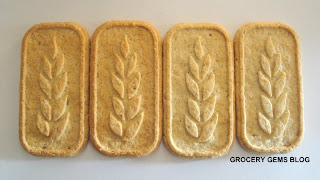 This Oat & Honey variety had a very strong honey flavour. The taste of honey is quite overpowering compared to the taste of the oats and leaves a strong aftertaste. Even though I like honey I don't think the overall flavour is for me. I think honey works best when it adds a subtle sweetness but in these biscuits the flavour is excessive. I would still give the other varieties a try though especially the Apple, Sultana & Cinnamon, which sounds delicious.

Included in the ingredients are rolled oats (19%) and oatmeal (16%) which makes them quite filling. Each biscuit contains 57 calories so I'm not sure why there are four biscuits in each individual pack, I would prefer that they were packaged in twos.