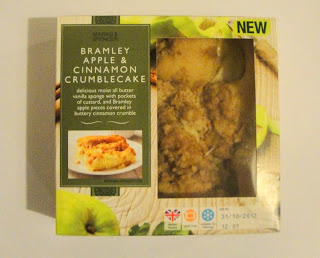 I do love Marks & Spencer's desserts, my favourites are the old classics; apple pie or apple crumble. I liked the sound of this interesting combination of desserts in the new Bramley Apple & Cinnamon Crumblecake. Not just a cake and not just a crumble, it's both. 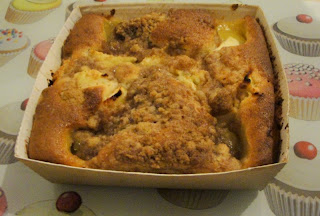 The cake was extremely easy to prepare, it just required 25 minutes in the oven. As soon as it started to heat up the wonderful aroma of buttery cinnamon filled the house. It's such a delightfully autumnal scent, perfect to warm up a cold evening. 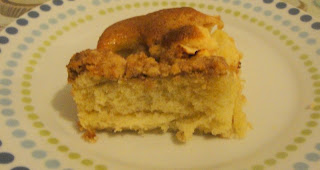 The cake itself is quite petite, only 335g in total but we still managed to cut it into four small portions. It consists of an all butter vanilla sponge topped with Bramley apple and cinnamon crumble. First off, the good aspects of this cake. The taste of the sponge is absolutely divine, being incredibly moist and full of buttery vanilla undertones. The apple pieces are delicious too, they have lots of flavour and are not too sweet. The crumble consists of just a few scatterings, it's not a full crumble after all, but what there is of it is extremely tasty. I loved the warming cinnamon sweet flavour. 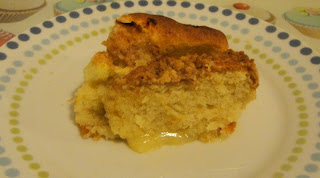 Now for the slightly odd part about this cake. It has "custard pockets" within it. I'll admit to not fully reading the description on the box of this crumble cake. I simply saw the word "crumblecake" and it was in my basket. If I'd looked a bit closer I would have seen the "vanilla sponge with pockets of custard" on the front of the box. Seeing as my hubby doesn't like custard I wouldn't have bought it. However, the custard was actually not bad at all. Considering it had been sitting underneath the cake and was baked with the cake, it still retained a lovely texture and didn't make the cake soggy at all. I don't know what kind of cake wizardry M&S uses but I like it!

Your enjoyment of this crumble cake will depend on how much you like custard even though there are only small amounts within the cake. I thoroughly enjoyed it, the custard and cake combination worked really well together and it even has extra crumble on top. My husband however will be sticking to the traditional apple crumble!

The Bramley Apple & Cinnamon Crumble costs £2.99 and is also available in a rhubarb version which is called Timperley Rhubarb Crumblecake.

Have you tried either of these new cakes?