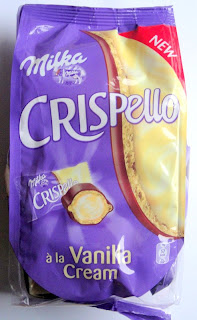 There was quite a bit of buzz a last month about the new Cadbury Crispello chocolate launch and it made me interested in trying the original version, the Milka Crispello. I managed to find this Milka Crispello Vanilla Cream in a local Polish grocery shop which I snapped up for the bargain price of £1.79. Instead of a "bar" (as much as you can call the Cadbury's version a bar, since it is three separate segments), these chocolates come individually wrapped in a large sharing style bag.

It was enough to make me go out and purchase a Cadbury's Crispello just so I could compare them properly! 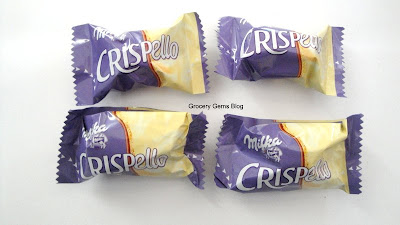 Inside the Milka Crispello bag there were 15 individually wrapped chocolates, each one having 57 calories. This is not too dissimilar from the Cadbury Crispello, which is marketed as a lower calorie chocolate, and has 55 calories in each piece. I much prefer having each chocolate individually wrapped, it's just more convenient, bonus points to Milka!

Once their differing wrappers have been removed, the Crispellos both look pretty identical. The Cadbury Crispello was a tiny bit smaller and also a fraction darker in colouring. On appearance these two are evenly matched. 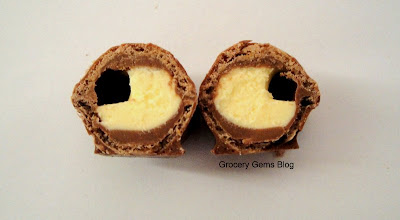 Hahaha the Milka Crispello looks like a pair of eyeballs. Yes I'm that immature, but seriously don't they? I'm not going to describe the Cadbury's Crispello too much, I've already reviewed it here. It's a fairly basic and pleasant chocolate experience, consisting of a crunchy wafer with a smooth chocolate truffle centre. This Milka Crispello is different as it is filled with a Vanilla Cream (although there is a chocolate version available too).


The outer chocolate coating is fairly similar in both versions, they are both sweet but a bit bland. The wafer sections are also identical, the same crisp wafer. The Milka Crispello also has a smooth truffle like centre with a similar consistency to the Cadbury's version, but oh dear me, this is where the Milka loses out to Cadbury's in terms of taste. The vanilla flavouring used is just horrible, it's that artificial, sickly aftertaste kind of flavour. This is coming from someone who loves vanilla and also loves crazy vanilla flavoured products (see my Crusha Cherry Vanilla review as evidence!). But I did not enjoy the vanilla flavouring used in the Milka Crispello. It really detracts from the enjoyment of the rest of the chocolate.

Sorry Milka but even if you give me girly individual sharing sized packaging - if the flavour is not right then it's worthless. I never thought I would say this but in the great battle between the Crispellos, Cadbury's has come out on top!

Check out my other Cadbury Vs Milka Face-Offs: