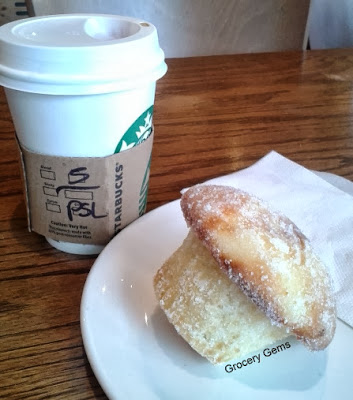 A quick review of the new Starbucks Duffin, which has had a fair bit of publicity as a fusion between a muffin and a doughnut. It's a bit like the next chapter of the Cronut saga - the equally bizarre crossing of a croissant and a doughnut. Starbucks is not somewhere I visit often anymore (I used to be a big fan though), in fact I haven't been to one in quite a while. But today I was caught outside in the pouring rain, and decided to nip in for some much needed warmth. I bought a Pumpkin Spice Latte just to see if it had more pumpkin flavour than it did last year (review HERE)- nope, still no pumpkin to be found here. It's simply a lightly spiced latte, like a weaker version of a Gingerbread latte. 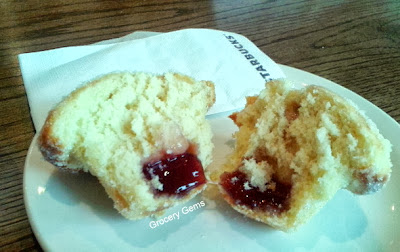 It was hard to resist trying out the new Duffin at the same time. I mean it's a basically a doughnut in the shape of a muffin, something which is instantly appealing to the kid in me. Despite being partly appalled by this creation, I have to admit it's pretty tasty. The texture of the cake itself is extremely soft with a pleasant hint of vanilla and nutmeg. The top of the Duffin has the crunchy, sugary texture which is instantly recognisable as a doughnut, and sits perfectly with the softer muffin texture within. There is also a generous amount of sweet strawberry jam which finishes off the Duffin nicely.

I probably won't ever buy one again but it has plenty of novelty value, and I did enjoy it as a quick sugary treat.