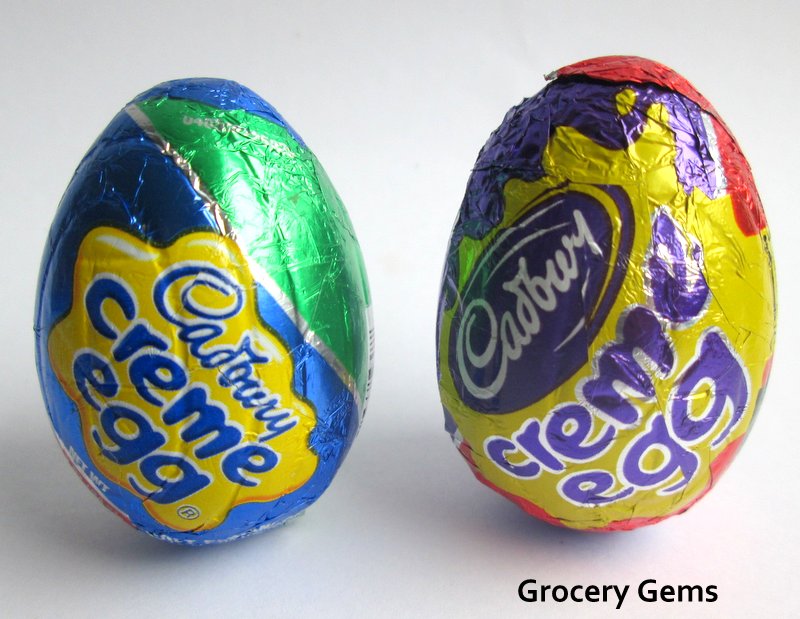 Did you know that the US has it's own version of the classic Cadbury Creme Egg that is different to the UK original? I had no idea, but thanks to my big brother who visited New York recently, and sent me a stash of goodies, I'm able to do a comparison review. The American Cadbury Creme Egg is actually made by Hershey's, so I was quite curious to see how the two different Creme Eggs would compare.

Now, it's quite hard to tell from the photos, but the UK Cadbury Creme Egg is actually bigger than the American one. I was quite surprised by this, aren't we always told in the media that American portions are MASSIVE and everything is bigger over there? Well, this one certainly isn't, our American friends are getting less for their Creme Egg; 34g compared to the UK egg at 39g (and less calories too; 150 calories to our 170 calories). Don't be surprised if, by next year, the UK ones are smaller - you have been warned!


Now, this is where the proceedings turn ugly. Cutting a Creme Egg in half and trying to photograph it is not an easy thing to do, believe me. In fact, it was especially hard with the egg from the US which had a much softer fondant centre. The yellow "yolk" part of the fondant wasn't very defined and had partly blended into the whiter parts. Of course this could be because it travelled some distance to reach me, but the runnier consistency isn't helping matters here.


The fondant in the UK Cadbury Creme Egg was much firmer, hence I could photograph the two halves as above and the filling stayed put without threatening to ooze out. The colouring within the fondant was also much better, with clearly differentiated "yolk" centre and white fondant. The whole thing just seemed thicker and visually more appealing. Round 1 Winner: UK Cadbury Creme Egg.


Side by side you can see the difference in the consistency of the filling. Taste wise these were quite hard to compare. The inner fondant is so sugary sweet in both that I honestly couldn't taste any real difference. They are both so overly sweet that I really didn't have a preference. The chocolate however, did taste noticeably different. The US one has a slightly chalky melt to the chocolate which the UK one doesn't have, and lacks the smoothness of the British version. However, considering this chocolate is made by Hershey's (which I often expect to be vile tasting) it was actually inoffensive enough. A bit too sweet and chalky but not horrible tasting. Ultimately, it probably goes without saying, that I preferred the chocolatey smoothness and firmer "yolk" of the British version. Round 2 Winner: UK Cadbury Creme Egg.