I bought these Milka ChocoLilaStix a while ago from a local Polish shop. I've posted a few Milka versus Cadbury reviews in the past so I couldn't resist comparing these to Cadbury Fingers. 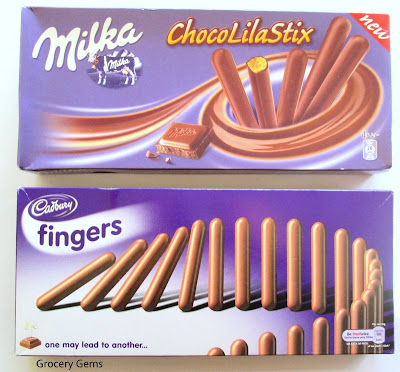 The boxes have a similar purple colour but I prefer the Cadbury domino line up and tagline "one may lead to another" compared to the Milka swirl.


The biscuits are in a similar black tray but the Milka version has separated sections which keeps the sticks a bit neater. I have to say the Milka ChocoLilaStix also looked nicer than the Cadbury - they have a smooth appearance compared to the Cadbury Fingers which are covered in knobbly imperfections, although they are also slighter longer and thinner. The Milka chocolate layer is also noticeably thicker.


The flavour was actually very similar, even down to the chocolate which I found surprising, I was expecting Cadbury to win hands down on the taste test! The inner biscuit especially was virtually identical, a basic shortbread affair. The chocolate in both had the same sweet and creamy notes, making them hard to distinguish in a blind taste test, but I have to admit that overall I preferred the thicker chocolate on the Milka version!