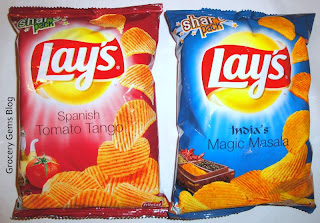 If you've read this blog before then you will know that I love finding new products. Living in London it's obviously easy to find interesting imported products but when that extends to crisps and chocolates I become very happy indeed.

That's exactly what happened when I quickly popped into a local Asian supermarket to buy a few basic groceries. At the till I spotted these gems for 79p each: Lay's Spanish Tomato Tango and Lay's India's Magic Masala crisps. They also had Lay's American Style Cream & Onion which I decided not to buy, and when I went back the next day they had all gone!

Lay's is the same brand of crisps as Walkers. For some reason they are called Lay's in the rest of Europe and in the US. On a holiday to France earlier this year my suitcase was loaded with food purchases (even on holiday I love looking for new food products!) and one of my favourites were Lay's Cheeseburger flavour crisps. I love trying out the unusual flavours that can be found abroad.

This was the first time I have seen the Lay's brand in a local shop (although the very next day I saw Lay's Paprika flavour crisps in a Polish shop!). These Spanish Tomato Tango and India's Magic Masala have been imported from India and are made for the Indian market. 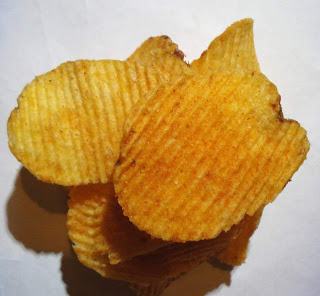 The Spanish Tomato Tango was my favourite out of the two. I like tomato ketchup flavour crisps anyway and these were very similar but with a deeper flavour. Looking at the ingredients there were spices that you wouldn't normally find in tomato flavour crisps such as ginger, clove and cinnamon. I was worried that this might be a bit overpowering to the tomato but the flavours all worked very well together. It had a rich tomato taste that was also sweet at the same time.

I'm not sure what the 'Tango' part of the name means, apart from to re-emphasise the Spanish theme. I think they chose the wrong dance though, surely these should be called Tomato Salsa not Tomato Tango!

The India's Magic Masala crisps were more popular with my husband than with me. They had a lovely flavour at first with multilayered herbs and spices coming through, especially the mango powder and cumin flavours. The chilli heat grew stronger after a few mouthfuls and was a bit too much for me, but then I don't enjoy chilli flavoured crisps. My husband however enjoyed these because they are not the usual chilli crisps that you can get in the supermarket. These have more herbs and spices at play which adds to the depth of flavour.

Hopefully I will be able to go back to the same shop and find the Lay's American Style Cream & Onion restocked because I would certainly like to give those a try too.

Have you found any imported Lay's crisps in local shops or brought any interesting ones back from abroad?

Email ThisBlogThis!Share to TwitterShare to FacebookShare to Pinterest
Labels: Around the World, Crisps, International