Part of my CyberCandy haul, it's taken me a while to get around to trying this chocolate bar. There's only so much chocolate a girl can eat!

I went through a bit of a phase as a teenager for always choosing a Twix if I wanted to buy a chocolate bar. Although I have to admit I hardly ever eat them now. This Twix Peanut Butter (or rather just PB, it's too cool for the full words) version has not done much to make me buy a Twix again in the future. 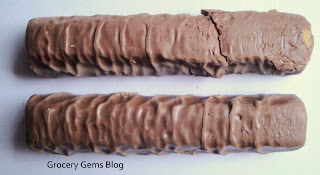 The chocolate bars didn't look too appetising once removed from the wrapper. I admit the top chocolate was a bit melted and broken but even the pristine second chocolate looked like a withered old finger. Luckily it did taste a bit better than it looked, but only a bit. 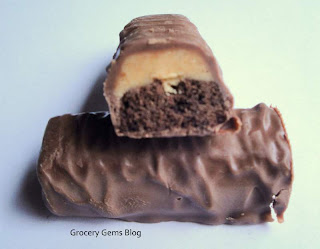 Once I cut into the bar I saw that the biscuit, or "cookie", layer had a very dark brown colour. This would suggest that it would have a strong chocolate flavour but it was actually very bland. It's not terrible but it didn't taste very different from the regular twix biscuit base. The peanut butter layer was even more disappointing. It was so incredibly tasteless that it might as well not even be peanut butter. There was a slight saltiness but that was it. I even spooned out a bit to taste the flavour on it's own and it was extremely poor. I like my peanut butter to have quite an intense peanut flavour so it's definitley not for me.

The outer chocolate layer is fine, the same as a regular twix. The sort of mass produced chocolate we are all used to. All together the flavours equal quite a bland chocolate bar.  It's a shame because one of my favourite sandwiches is nutella and peanut butter spread! The Twix Peanut Butter doesn't come close in terms of flavour.