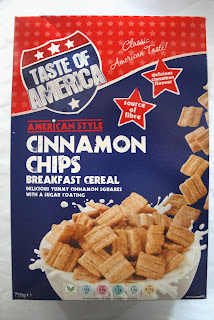 The second of my newly discovered cinnamon flavoured cereals (the first is Sainsbury's Wholegrain Malties) is this American Style Cinnamon Chips cereal by Aldi. I don't often go to Aldi, in fact I've only been there twice. The last time I went they were doing an American event with lots of products under this "Taste of America" range. I never imagined that Aldi ran events like this or I would have gone there a lot sooner! 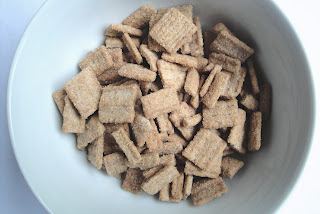 These American Style Cinnamon Chips are similar to Curiously Cinnamon in that they are covered in a very generous layer of cinnamon sugar. One of the first things I noticed was that the cereal is quite irregular in shape. Some of the pieces are quite large, others are half or a third of the size. This is not because the cereal is all broken, as you sometimes get with cheaper brands of cereal. The smaller shapes are obviously supposed to be that size and fits with the description of "cinnamon chips". 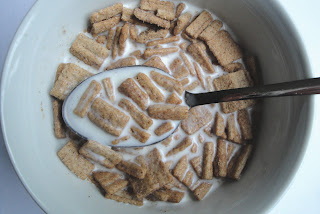 As well as this Cinnamon Chips breakfast cereal I also stocked up on Aldi's American Style Pancake Syrup, American Style Marshmallows (which are practically the size of pillows!) and American Style Barbeque Sauce. All the products have been very satisfying so far and I would certainly buy them again. Looking at the Aldi website they are current doing an "Asia Specialities" range.